Pippa Middleton has split from her longtime on-again, off-again boyfriend Alex Loudon, according to reports. Is it time for Prince Harry to make his move? 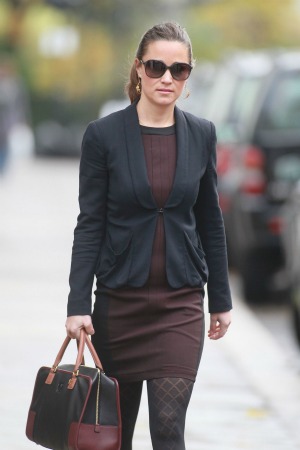 The hottest bachelorette in all of England is single and ready to mingle! Pippa Middleton is a totally free woman, after reportedly breaking things off with her on-again, off-again boyfriend, Alex Loudon.

“She and Alex split briefly in the summer — but this time it’s over,” a source told the Daily Mail. “They are barely speaking.”

Pippa, the sister of Queen-to-be Kate Middleton, rose to fame after she stole the spotlight by wearing a clingy white dress to the royal wedding.

“It was said after the wedding that Alex was jealous of Pippa flirting with Prince Harry,” a friend told the Daily Mail. “But the truth is she and Harry are just mates.”

How long will that “just mates” line last? Prince Harry has called Pippa a “foxy filly” — and with his American training stint due to complete in the next couple of weeks, he will be returning to Great Britain just in time to cheer Pippa back up.

Meanwhile, Pippa has reportedly turned to her sister for a shoulder on which to cry.

“Pippa tried to get over the split by spending last weekend with Wills and Kate at Balmoral,” a friend told the paper.