The husband of Zara Phillips has been fired from his position on a British rugby team for “unacceptable” off-field behavior. 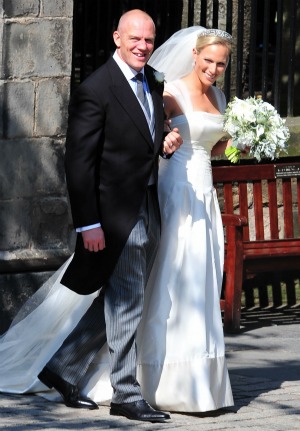 A new scandal is rocking the royal family — and this time it has nothing to do with Prince Harry and cocktail waitresses.

Zara Phillips, the granddaughter of Queen Elizabeth, is hanging her head in shame today after her brand-new husband Mike Tindall was sacked from his rugby team for behaving in a most “unroyal” manner.

Tindall was busted kissing another woman (later identified as an ex-girlfriend who was a guest at his wedding to Phillips just weeks earlier) at a British nightspot, then downing shots at a dwarf-throwing contest the night before an abysmal performance on the rugby field.

“The Rugby Football Union has taken the following disciplinary action regarding breaches of the England Elite Player Squad Agreement during the 2011 Rugby World Cup,” reads a statement from the sport’s governing body.

“Mike Tindall has been removed from the England Elite Player Squad with immediate effect and fined £25,000 for his conduct around the events that took place in Queenstown on the night of Sunday, September 11, 2011.”

Tindall plans to appeal the decision — but his father is royally ticked.

“Mike is being used as a scapegoat for the poor performance of the team,” Phil Tindall told the Daily Mail.

“It seems unfair. I feel there is only this scandal because of who Mike is linked to. In terms of the girl, it had been proved she was a friend and not somebody he just picked up.”

“In terms of the drinking, other squads had done similar things but the full weight of their unions haven’t been brought down on them. It also happened the day after a game, they didn’t have another game for a week. Mike was always fit for the matches. He has had support from the rest of the squad.”

Two other team members were given suspended fines.

Zara Phillips is the cousin of Princes William and his wife Kate Middleton, and Prince Harry.