While it’s David Beckham that is known as “Golden Balls,” it’s Victoria Beckham that makes the golden calls with her $33,000 iPhone. 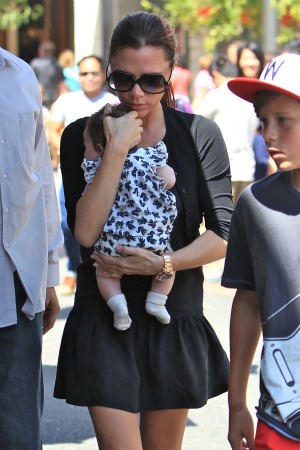 Victoria Beckham spiked interest among the British media earlier this week over a golden iPhone she was recently seen holding. The 37-year-old fashion designer was photographed talking on the pricey 24-carat gold cell phone that is worth $33,000.

The rumor is that Victoria’s husband, David Beckham, gave her the flashy phone as a “push present” for having baby Harper Seven on July 10.

So did her husband really give her such an expensive present after the birth of their first daughter? According to Us magazine, no. Beckham’s publicist has also been quick to dismiss the rumor.

Even though the mother of four does own the pricey cell phone, “She’s had the phone for ages,” the rep explains. “Nothing new.”

It’s not the first time Posh has been snapped in public with her flashy device. In February, she exposed the phone’s intimate screensaver — a snap of her husband posing topless.

Meanwhile, for those who still want to get a little piece of David Beckham in their phone (who doesn’t?), the international soccer star has five iPhone apps available for his fans. David Beckham by Mobile Apps contains all the latest news concerning everything going on in Beckham’s world while David Beckham’s Hair Styles by Paul Shackleford is the ideal app for those who want to see all the hairstyles donned by Beckham in recent years.

There’s also David Beckham’s Tats by Paul Shackleford to check out all of his tattoos, as well as the Beckham Footballer app and a David Beckham trivia app.

We wonder if his wife has any of these apps in her phone?