The Vampire Diaries threw a homecoming dance not to be forgotten — welcome back, Klaus.

If we’ve learned anything from The Vampire Diaries, it’s that school dances are an invitation for troublesome vampires — especially ones named Klaus (Joseph Morgan). 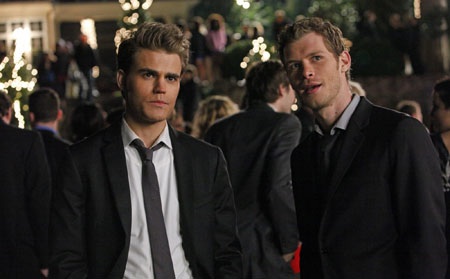 Last week, The Vampire Diaries revealed that Mikael (Sebastian Roche) is Papa Original and Klaus supposedly killed his mother, who happened to be the Original Witch. We know, it’s a lot to take in.

On this week’s explosive midseason finale, the face-to-face battle between Klaus and Mikael (Sebastian Roche) that has been brewing for 1,000 years finally boiled over.

The best part? Mikael went to extremes to make it look real by using an old ancient dagger that human Elena drove through his heart — which would obviously be removed once Klaus was convinced he was dead.

That’s not the only thing. Rebekah convinced Klaus it was true. We’ve got a side switcher in the mix!

Too bad for Rebekah, Elena couldn’t leave anything to chance.

While Rebekah admired herself in her homecoming dress and poured her “heart” out to Elena about never getting to go to a school dance, Elena did what she had to do — she staked Rebekah to make sure Rebekah wasn’t playing them. 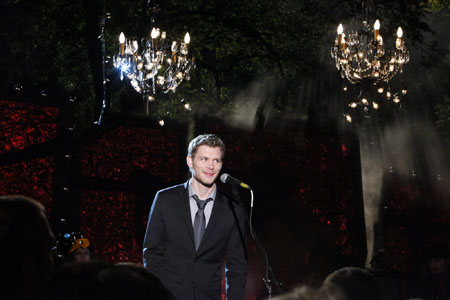 All this led up to the return of Klaus at the homecoming dance, which was moved to Tyler’s property after the gym was flooded. Anyone else think that was Klaus’ doing considering Tyler referred to the overboard bash as a “wake.”

Klaus demanded Stefan bring Mikael’s body to him, but not before Stefan bartered for his freedom.

Cue the awesome secret plan that Damon had been cooking up. To neutralize Stefan, he and Mikael planned to sink The Original Papa’s fangs into Stefan.

Back at Tyler’s, Klaus had filled the dance with his own friends — a pack of hybrids he had been collecting from different areas.

Caroline managed to get herself into a mess, when she told Tyler he couldn’t be trusted. Feeling something was bound to go down, Tyler vervained Caroline, claiming it was to protect her.

Basically, Tyler knew if everyone was scheming against Klaus the hybrid would kill everyone including Caroline, so he had to protect Klaus, which would protect her. 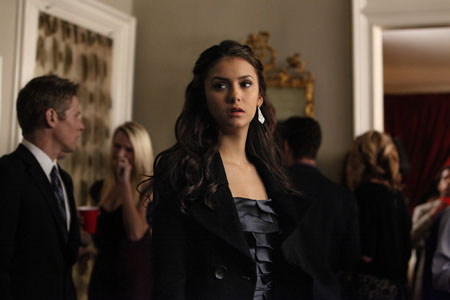 Damon managed to silence Tyler for the time being, while Mikael and Klaus came face-to-face. In Mikael’s grasp? The doppleganger, Elena.

If Elena dies, the hybrid line ends. A knife was plunged into Elena who was actually Katherine and then Damon came out and staked a distracted Klaus.

In a twist, Stefan tackled Damon before Klaus could die, sending Klaus at his “father” with the dagger.

Kaboom, Katherine throws the “grenades” at the pack, but Klaus gets to Mikael and he daggers him. Mikael goes up in flames or smoke or something weird like that and Stefan earns his freedom.

Sucky way to earn freedom if you ask us.

To wrap this all up into a nice midseason finale bow…

Damon is convinced they’re never getting Stefan back and Elena reasons that they have to let him go then.

Oh, don’t worry — TVD doesn’t leave us with a soft ending — ever!

In the last five minutes, we learned that it was obviously Katherine who was talking to Klaus at the dance and he told her (thinking it was Elena) that if he died his hybrids had orders to kill Damon.

Katherine raced back to the boarding house and awoke Stefan to tell him of Klaus’ plan. She said she was going through with the plan regardless.

She didn’t know if Stefan would stop Damon from killing Klaus, but she was hoping his humanity would come though, so he wouldn’t let his brother die.

What does Katherine need Stefan to do now? Get mad!

In revenge mode, Stefan took all of the caskets housing Klaus’ family, prompting what will no doubt be the best back half of episodes in TVD history!

Best moment ever? Seeing Stefan surrounded by the caskets, while looking super pissed as he talked to Klaus on the phone.

See you Jan. 5 when The Vampire Diaries returns!