Nascar’s Brian Vickers is making an appearance on Hart of Dixie this week — too bad it’s to throw a wrench in Bluebell’s annual turtle race.

It’s turtle time on Hart of Dixie this week! 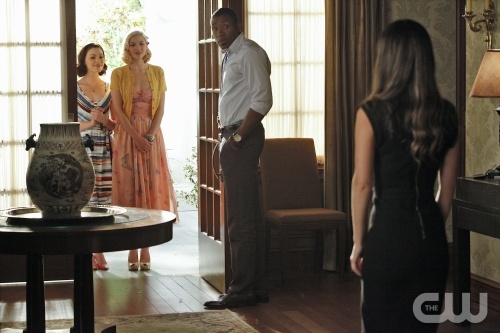 The guest stars just keep popping up on the CW in November! This week, Nascar’s Brian Vickers makes an appearance on Hart of Dixie when he must “drop out” of hosting Bluebell’s annual turtle race.

Oh no, who’s going to step in on the new episode, “The Crush and The Crossbow?”

Lemon’s not completely convinced he’s the right choice, but she might have to accept that the Mayor might be the only one.

Elsewhere, could there be a romance on the horizon when Zoe catches the eye of a veterinarian? We’ll find out!

The CW officially describes “The Crush and The Crossbow” as the following: “When Nascar’s Brian Vickers (appearing in the episode as himself) has to drop out of hosting Bluebell Junior League’s annual turtle race, Lemon (Jaime King) is reluctantly convinced that the mayor (Cress Williams) is the perfect replacement as her co-host. Zoe (Rachel Bilson) is asked out on a date by a handsome local veterinarian, Dr. Judson Lyons (guest star Wes Brown). Wade (Wilson Bethel) has an unexpected visitor who stirs up all kinds of trouble for him.”

Hart of Dixie was recently picked up for a full season order along with The Secret Circle and Ringer after the CW’s president Mark Pedowitz said, “With compelling storylines, engaging characters and tremendous buzz we firmly believe Hart of Dixie, Ringer and The Secret Circle can become signature series for the CW, the kind of top-notch shows that are synonymous with our brand.”

Head over to our comments section and tell us what you’re loving about Hart of Dixie!