Kris Jenner isn’t bothering to keep any skeletons in her closet. The matriarch of the Kardashian empire is sharing regret over her “wild sex” affair, and we’ve got the scoop on how she got caught! 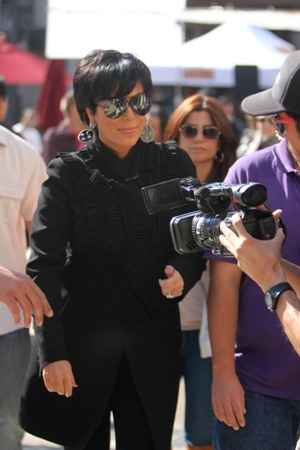 Kris Jenner is pulling out all the stops while promoting her memoir, Kris Jenner… And All Things Kardashian. During Wednesday’s appearance on the Tonight Show with Jay Leno the 56-year-old shared her regrets over cheating on first husband, Robert Kardashian.

Watch video of Kris Jenner spilling the details to Jay Leno below!

“Robert had been the only man in my life since I was 18,” Kris Jenner said. “I don’t know why I was having a mid-life crisis at 30, but I was. His name was Ryan, and he was a producer. We had wild sex everywhere, all the time.”

While Kris Jenner’s conscience seems to have evolved since then, it wasn’t she who chose to come clean about the affair — she got caught.

Global Grind reports, “The affair came to a halt when Rob Kardashian had Kris followed and caught her with a red-haired lover in a restaurant. He filed for divorce a short time later, then went on to represent OJ Simpson in the most famous murder trial of the past 20 years.”

Kris Jenner and Robert Kardashian had four children during their 12-year marriage: Kourtney, 32, Kim, 31, Khloe, 27, and Robert Jr., 24. They divorced in 1990 and he passed away after battling esophageal cancer in 2003.

Kris Jenner, seen here at The Grove for an Extra interview on Nov. 7, went on to marry Olympic track and fielder Bruce Jenner in 1991. Their two daughters are 16-year-old Kendall Jenner and 14-year-old Kylie Jenner.

Will you be reading Kris Jenner… And All Things Kardashian? What do you think of Kris Jenner’s affair confession?