PBS loves the ladies! The network will air a new documentary called Women Who Rock that centers on female musicians. Hosted by Cyndi Lauper, it exposes the highs, the lows and struggles of the industry’s most prolific female artists. 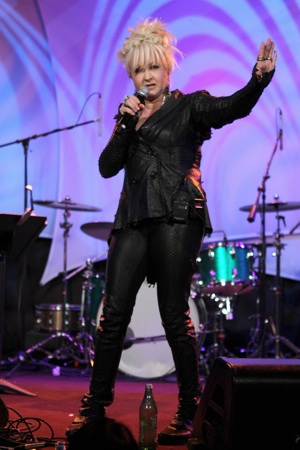 Here’s a special that’s just for the ladies: PBS Arts From Cleveland presents Women Who Rock. It’s an amazing performance documentary that chronicles the influence and accomplishments of female musicians. It’s hosted by Grammy-winning singer and songwriter Cyndi Lauper and charts the evolution of women in rock and roll.

Women Who Rock will feature a retrospective on the genre’s roots, including its blues beginnings in the 1920s, the counterculture era of the ’60s, disco in the ’70s and empowerment and pop in the ’80s. The film highlights the struggle for women to gain respect in the male-dominated industry.

Some of the artists profiled include Bessie Smith, Ma Raney, Mother Maybelle Carter, Mahalia Jackson, Nancy Wilson of Heart, Bonnie Raitt, Mavis Staples and Deborah Harry. Carol Stein, who co-directed Women Who Rock with Susan Wittenberg, says the most extraordinary element of the film “is the intimate and emotional connections it makes between female rockers — through time and across styles.”

“The connections are both historical and literal,” she says. “We bring these musicians together to talk about their personal journeys; moments like those between gospel singer/activist Mavis Staples and rock icon Cyndi Lauper, for example, are moving and illuminating. We show a side of these performers and others that people have not previously seen.”

Wittenberg added, “Women Who Rock is emotional, passionate, and celebratory. No matter whether you’ve dreamed of strapping on a guitar to riff through ‘Barracuda’ or just danced unabashedly to ‘Girls Just Want to Have Fun,’ you know the power of female rock.”

Watch a preview clip from the documentary below.

Watch PBS Arts From Cleveland: Women Who Rock Preview on PBS. See more from THE ARTS.