Adam Levine used the Victoria’s Secret Fashion Show to get romantic with his model girlfriend, Anne Vyalitsina. The singer serenaded the “Angel” during Maroon 5’s performance at last night’s show. 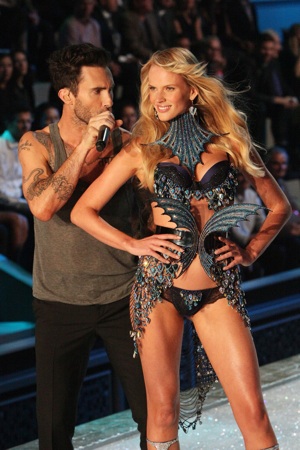 The show featured live performances from Kanye West, Jay-Z and Nicki Minaj, but Maroon 5’s rendition of “Moves Like Jagger” was a must-see. Levine belted out the tune as girlfriend Vyalitsina strutted down the catwalk wearing a sparkly blue ensemble. The couple displayed some serious PDA by holding hands and sharing a quick kiss on the runway.

Vyalitsina told Us Weekly, “We kind of wanted to make [Maroon 5] as much a part of the show as possible. We just tried to have fun and make it as cute as we could.” The singer and the supermodel have been together for over a year and they’re still going strong.

The pair previously joined forces in January to promote prostate and testicular cancer awareness. They appeared in a risqué photo, which showed Levine completely nude with Vyalitsina’s hands covering his nether region. They also graced the cover of Russian Vogue (once again in the nude) earlier this fall. They’re definitely comfortable in the skin they’re in.

As for this year’s fashion show, it was filled with plenty of jaw-dropping moments including Miranda Kerr‘s walk during the “Angels Aquatic” segment. The model wore a Fantasy Bra covered in $2.5 million worth of diamonds. She was a true showstopper.