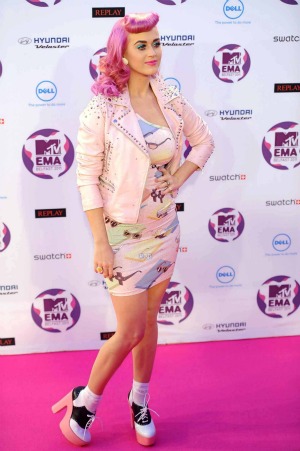 Singer Katy Perry was cute as a button at the Europe Musical Awards in Belfast, Northern Ireland this past week, but the only thing anyone could talk about was the possibility that she could be pregnant. The rumors started when photographers spied a slight bump under her skin-tight dress.

The hitmaker rocked a 50s tribute outfit with a studded jacket, tight dress and platform saddle shoes. However, cameras spotted a slight stomach bump, bringing rumors to life that she and hubby Russell Brand have added to their family.

Some say the photos do seem to show Perry sporting a hint of a bump as she wore a super-tight dress that really shows off the curvature of her belly. She also appeared to be trying to cover up with a jacket — perhaps to hide her pregnant tummy?

There was speculation for years that Jessica Simpson was pregnant because of her fluctuating weight, so will Perry start having the same problem?

There’s always the possibility that Perry isn’t pregnant at all. While her bump does appear to be pretty prominent in the photos, it’s always possible that she’s suffering from a bit of PMS-induced bloating. After all, if she was truly trying to hide a pregnancy, why would she wear such a tight-fitting dress? The appearance of her stomach could also have something to do with her undergarments not fitting properly and there are other photos out there where Perry’s belly appears to pooch out a little bit.

If comedian Brand is indeed going to be a father, we’re sure he’ll let the cat out of the bag sooner rather than later. And our guess is that he’ll be celebrating with fireworks when the big day actually comes in his true over-the-top style.