Dakota Fanning is simply too young and too sexy in a series of perfume ads for Marc Jacobs — or so says one watchdog group. Do you agree? 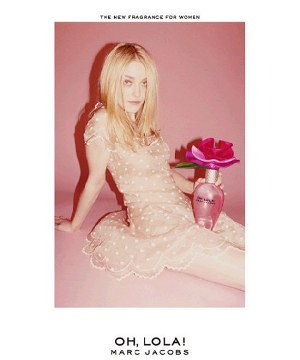 Dakota Fanning and Marc Jacobs are stirring up trouble across the pond. The Advertising Standards Authority in the United Kingdom has banned a series of ‘Oh, Lola!’ ads starring the young actress.

A total of four people got in touch with agency to challenge “whether the ad was offensive and irresponsible as it portrayed the young model in a sexualized manner.”

After an investigation, the ASA ruled 17-year-old Dakota Fanning to be too hot for print. A statement on their site reads:

The sentence? The ASA has decreed, “The ad must not appear again in its current form.” The report notes perfume maker Coty UK has disputed the ruling, stating, “They believed the giant perfume bottle was provoking but not indecent.”

If the photo and controversy ring a bell, you may recall SheKnows asked readers back in June if Dakota Fanning’s photo was too sexy. Of shooting the ad in question, Marc Jacobs commented previously, “When we were speaking about who to use in the ads. I had recently seen The Runaways… I knew she could be this contemporary Lolita, seductive yet sweet.”

Dakota Fanning was thrilled to take part in the Marc Jacobs campaign. “Every time one of Marc’s fragrances comes out I run to the store to buy it,” the actress said. “The moment I was asked to be a part of the Oh, Lola! campaign, I was so humbled and said ‘yes’ immediately.”

Do you think Dakota Fanning’s perfume ad deserved to be banned?