Nancy Grace and her dancing partner Tristan MacManus were the latest couple voted off Dancing with the Stars.

Nancy Grace and dancing pro Tristan MacManus hung up their dancing shoes last night after they were voted off of Dancing with the Stars. Her jive received less-than-stellar reviews from the judges and apparently viewers agreed. The dancing duo was sent home, leaving four contestants left. 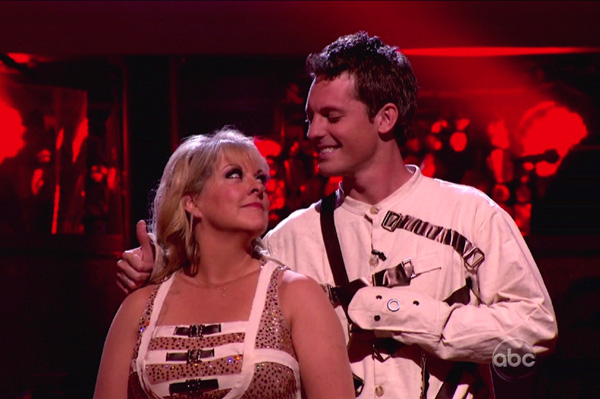 “You’ve come to the ball, and you’ve lasted eight weeks, however, for me, it’s midnight and it’s time to go home,” judge Len Goodman told her after her performance.

Grace, who recently revealed she lost 25 pounds on DWTS, appeared on Jimmy Kimmel Live with her partner Tristan to talk about their time on the hit show and the disappointment over being voted off.

“Was this a miscarriage of justice? Absolutely! I was robbed!” Grace joked to Jimmy. “It’s a felony — even in California!”

Kimmel couldn’t help but have fun with Grace’s wardrobe malfunction on the show back in September. “Whose idea was it for Nancy’s nipple to come out? That was genius!” he said to Nancy.

“That did not happen!” she said, before deciding to joke along with him. “The beauty of the dance. I sacrifice a lot for my art.”

The HLN host went on to give props to her dancing partner, Tristan, who appeared as a pro dancer for the first time this season. “I am so proud; I really cannot take the credit — it’s been all Tristan from the get-go,” she said. “It’s been the whole crew at Dancing with the Stars. It’s been my whole family who took care of [my] twins so that I could dance.”

Dancing with the Stars returns on Monday on ABC with J.R. Martinez, Ricki Lake, Hope Solo and Rob Kardashian remaining in the competition.

Also check out: Nancy Grace on Conrad Murray: God’s gonna get him >>