Eddie Murphy is out! Following in the footsteps of Brett Ratner, Murphy has officially resigned as next year’s Oscar host. 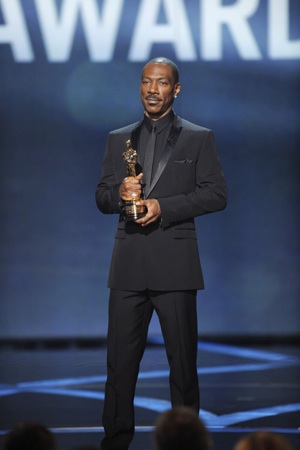 The 84th Academy Awards are turning into a real-life soap opera. One day after ceremony producer Brett Ratner resigns, host Eddie Murphy officially steps down. The actor, who headlines Ratner’s latest film Tower Heist, released a statement confirming his departure from the show.

“First and foremost I want to say that I completely understand and support each party’s decision with regard to a change of producers for this year’s Academy Awards ceremony. I was truly looking forward to being a part of the show that our production team and writers were just starting to develop, but I’m sure that the new production team and host will do an equally great job.”

The Academy of Motion Picture Arts and Sciences President Tom Sherak embraced Murphy’s decision to leave, saying, “I appreciate how Eddie feels about losing his creative partner, Brett Ratner, and we all wish him well.”

Earlier this week, Ratner came under fire, after delivering a homophobic slur during a recent Q&A event. When asked about his Oscar preparation, he told the audience “Rehearsal is for f*gs.” This caused a whirlwind of bad press, which pressured the Academy to fire him as the show’s producer. Ratner attempted to calm the media storm by issuing an apology but it was too late. Shortly after, he officially resigned from his position.

Next year’s Oscars are currently in limbo without a host or producer. The search is on to fill both slots, which are integral to the ceremony’s success.