George Clooney is one of Hollywood’s biggest stars. He’s successful, attractive, smart and did we mention attractive? In a recent interview with Rolling Stone, the actor gets candid about relationships, losing his virginity and his love of farts. 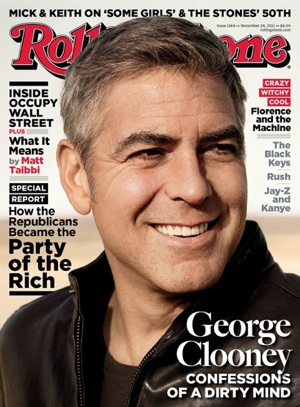 George Clooney is talented, handsome and has a soft spot for farts! The modern reincarnation of Cary Grant really lets his guard down in the latest issue of Rolling Stone. The Oscar-winner explains his unique sense of humor, his first sexual encounter and his latest love, Stacy Keibler.

Clooney opened up about his loose and somewhat juvenile taste in comedy. Despite his debonair exterior, simple words like “Johnson” can kick-start a laughing fit. It’s a go-to gag that always makes him crack a smile. For example, “‘He showed her his Johnson and she left.’ You can actually say that in mixed company or on late-night TV,” explained Clooney.

The actor also has a thing for farts. The very idea of one tickles his funny bone. It’s something that he and his close friends actually bond over. “We think it’s one of the funniest things in the history of mankind. Even the idea of a fart makes me laugh. Saying the word ‘fart’ makes me laugh. I have iFart on my phone. I have remote whoopee cushions. Farts. To me, there’s nothing funnier.”

Clooney also told the magazine about his first sexual experience. America’s hottest bachelor lost his virginity at 16, which he now considers “very young, too young.” His days of awkwardness seem like a lifetime ago due to the beautiful ladies that have crossed his path (including Dancing with the Stars‘ Elisabetta Canalis). His new main squeeze, former wrestler-turned-actress Stacy Keibler, seems to be in relationship heaven. She once tweeted about “smiling all day long,” which had fans speculating about her newfound love. Clooney responded to her social media declaration with, “She can do whatever she wants,” he says. “I rarely tell anybody what they should be doing with their life.”