Glee went all the way Tuesday night, with “first time” moments that Blaine, Kurt, Rachel and Finn will never forget. 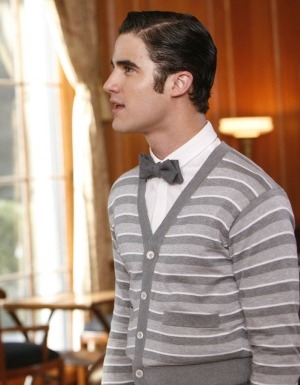 Despite knowing there could be negative talk surrounding the same-sex, “first time” moment between Kurt and Blaine, Glee still embraced the moment and did a wonderful job with the story.

This week, Glee explored the sensitive subject of high school sex in the all-new episode, “The First Time.”

Like we previously said, it’s not the first time the show took a dive into the sex pool, but this time it was different.

Both big moments blended with McKinley’s production of West Side Story and did so with the usual Glee-flair.

Oh, when we say “blended,” we mean the musical undertone and the moments went together.

Glee is guided to the light for Sam’s mom >>

Blaine and Kurt’s “first time” came with the same drama everyone else faces — awkwardness with a bit of jealously mixed in.

Blaine thought it would be a good idea to invite the Warblers to the musical, which brought Sebastian, a cutie with an eye for Blaine, into the mix.

With Kurt’s insecurities at an all-time high with Sebastian around and Blaine’s continued chatter about wanting to be adventurous, we thought it might go down a bad path — and it did at first.

Blaine got drunk and threw himself at Kurt, while Kurt told him to sober up and think of how he wants his first time to be.

What was interesting is how Ryan Murphy and the rest of the crew approached the moment. Knowing that people would be talking about the episode and the content, they didn’t go to extremes to make it jaw-dropping on any level.

They made it like any other couple experiencing sex for the first time.

Then there was Rachel and Finn. These two kids set up a roaring fire, romantic candles and everything else they thought would make their “first time” together magical.

Remember, Finn was with Santana in the past and the cheerleader made no point of keeping quiet about how “bad” he was in bed.

Rachel went in with two thoughts: One, she wanted to be with him, and two, she thought the experience would help her acting. That did not sit well with Finn.

After jitters and soul searching, they realized it was right and went with what was in their hearts — sex.

Both of these couples will forever be changed: not just in their current relationships but in future ones, too. Tonight they took a step that led us into a whole new world of Glee.

What did you think of “The First Time.” Do you think Kurt and Blaine’s moment was as big of a deal as some outlets will probably make it out to be?