After one year together, talk show host Chelsea Handler has split with hotelier Andre Balazs. 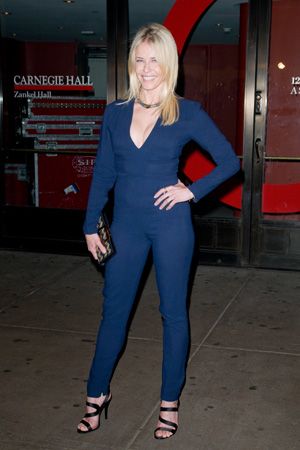 Chelsea Lately host Chelsea Handler is a single woman after splitting from her boyfriend of one year, hotelier Andre Balazs. The talk show host was spotted looking upbeat last night as she picked up the Glamour Women of the Year Award last night at Carnegie Hall.

She’s fine,” an insider tells Page Six. “If she’s feeling down, she’s certainly not showing it.”

The couple was last spotted together over Halloween weekend at the “Sinners or Saints” party that Balazs hosted at the Top of the Standard – -so what went wrong?

The long-distance relationship may have proven to be too much for the couple, as Handler films her show in California and Balazs works primarily in New York. He owns seven hotels, including the Mercer Hotel in New York and Chateau Marmont in Hollywood.

Balazs dated Uma Thurman for two years before splitting in 2006, while Handler has been linked to 50 Cent and E! Entertainment television executive Ted Harbert.

Handler appeared happy as she walked the red carpet last night and chatted with her BFF Jennifer Aniston at the Glamour Awards, where she picked up “Queen of the Night” award for her talk show on E!.

“I rarely comment on my personal life, but I am here to tell you that I’m madly in love…” Aniston said, as she presented Handler with the award. “I’m madly in love with the one and only Chelsea Handler!”

Handler accepted her award and told the crowd, “I love women. I love supporting women. I love giving women jobs. I love being a woman and being a good friend and a sister, because I’ll never be a mother!”