Chaz Bono is stripping down and accepting honors! The Dancing star has been named to the 2011 Out 100 list. 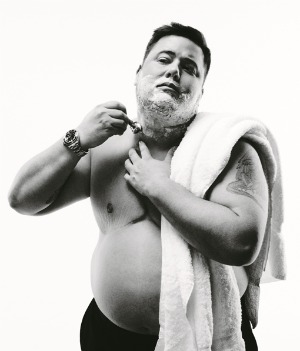 Chaz Bono is on this year’s Out list of most influential gay, lesbian and transgender men and women. In honor of being named to the Out 100, Chaz posed in this shirtless portrait for famed photographer Gavin Bond.

The portrait of Chaz, shaving with a white towel over one shoulder, was inspired by a similar photo shot by the late photographer Richard Avedon.

Chaz Bono’s portrait sits in good company with fellow honorees Adam Lambert, Tim Gunn, Brad Goreski, Ken Mehlman, Andrej Pejic, David Mixner and more. In the promo video below, the honorees explain how they are “out, proud and even married.”

It was in April 1995 that Chaz (then known as Chastity) came out as a lesbian in an interview with The Advocate, a national gay and lesbian magazine. In 2008, the 42-year-old began the gender transition process, which was confirmed publicly in June of the following year by his publicist, who announced, “It is Chaz’s hope that his choice to transition will open the hearts and minds of the public regarding this issue, just as his coming out did.”

Of Chaz Bono’s public image as a transgender man Out writes:

The furor directed at ABC after it announced that Chaz Bono, who underwent reassignment surgery last year, would be included in the current season of hit reality show Dancing With the Stars simply confirmed the value of the network’s bold decision. After years in which American Idol contestants were encouraged to keep their sexuality private, seeing Bono dancing with his female instructor was one of television’s most inspiring images of 2011 — and a salutary reminder of how rare such positive images are. Bono’s other achievements this year include a documentary, Becoming Chaz, which premiered at the Sundance Film Festival and garnered three Emmy nominations, and the publication of his third book, Transition: The Story of How I Became a Man.