Conrad Murray’s conviction sparked a lot of talk and opinions among Michael Jackson fans and celebrities.

It seems that everyone has an opinion about Dr. Conrad Murray’s conviction of killing Michael Jackson with a fatal dose of propofol on June 25, 2009. Emotions ran high both in and outside of the courtroom — Jackson’s sister, LaToya Jackson, let out a yell after the verdict was read and hundreds of fans gathered outside to express their joy over the trial’s outcome. 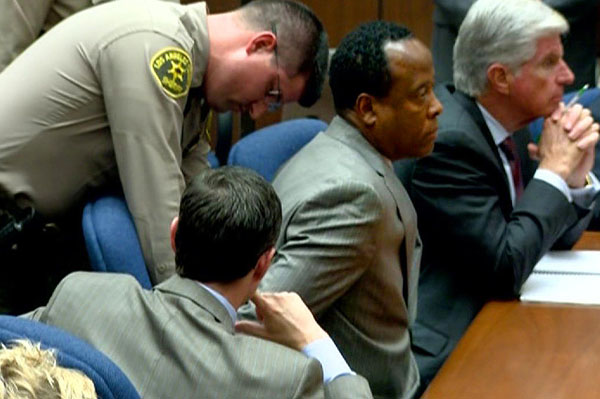 Dozens of celebrities also weighed in about Murray‘s conviction — some for, some against and some just looking for their fan’s thoughts.

Jackson was one of the first to weigh in about her brother’s case — well, besides her courtroom outburst.

“VICTORY!!!!!!” Michael I love you and I will continue to fight until ALL are brought to justice!” she tweeted right afterward.

The former host of The Talk hoped this would give closure over the King of Pop’s death.

“Do you think this GUILTY #conradmurray verdict will bring closure? I hope Michael Jackson’s soul can just get a rest…” she tweeted.

R&B singer Tyrese took to yelling to express his thoughts.

“Big question is will conrad murray serve time? Judge has 20 days to sentence him, and can give him up to 4 years in prison.”

Comedian Paul Sheer sees the downside of the Murray conviction, “I guess I’ll never get to use my Dr. Conrad Murray Groupon now.”

Rev. Al Sharpton had some deep thoughts about the results, “Murray’s conviction is just a down payment for the family of Michael Jackson,” he said.

The newly-married actress Nikki Reed commented on the verdict while promoting Breaking Dawn.

“Listening to the #ConradMurray verdict on the radio while in route to the buckhead theater in Atl for the @twilight tour,” she tweeted.

What are your thoughts about the Conrad Murray conviction?