Director Brett Ratner called into the Howard Stern Show Monday to admit he lied about sleeping with Olivia Munn — and to apologize for dropping that other f-bomb. 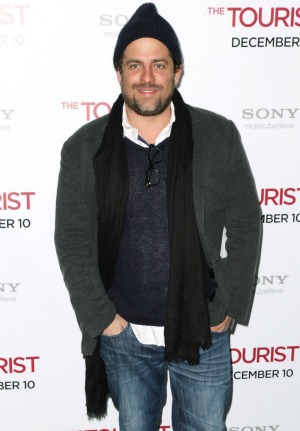 Horrible Bosses producer Brett Ratner had some harsh words for actress Olivia Munn last week when asked about a passage in her memoir that many thought referred to him — but now he says he was just kidding and he never actually bedded her.

Ratner called into the Howard Stern Show Monday to chat about the uproar he caused last week when he talked about Munn — oh, and that little gaffe when he dropped Hollywood’s least favorite f-bomb.

Calling the actress “a friend,” Ratner told Stern Munn advised him he is not the guy she referred to in her book.

“She’s actually talented. The problem is I made her look like she’s a whore,” Ratner said.

The director also offered an apology for using a gay slur during a Q&A for his new movie Tower Heist on Friday night. When asked about his rehearsal schedule, Ratner responded, “Rehearsal is for f*gs.”

In a statement Monday, Ratner said, “I apologize for any offense my remarks caused. It was a dumb way of expressing myself. Everyone who knows me knows that I don’t have a prejudiced bone in my body. But as a storyteller I should have been much more thoughtful about the power of language and my choice of words.”

His olive branch wasn’t good enough for GLAAD, who issued their own statement.

“This apology is a good start, but we’re working with Ratner’s people for more action, to clearly send a message to Hollywood that the anti-gay slurs used by bullies and bigots have no place in the world of entertainment, or anywhere else,” they wrote.

Ratner’s remarks are putting him under extra scrutiny because he is producing this year’s Oscar broadcast.

Tell us: Should Brett Ratner be dumped from the Oscars?