Michael Jackson’s family, including his mom Katherine and sister La Toya, have reacted to the Conrad Murray guilty verdict.

After an emotional 6-week trial, Dr. Conrad Murray was found guilty of involuntary manslaughter in the death of Michael Jackson — and was immediately handcuffed and taken away. He is facing up to four years in jail and will find out his fate on Nov. 29. Up until that time, he will be held without bail in the L.A. County jail. 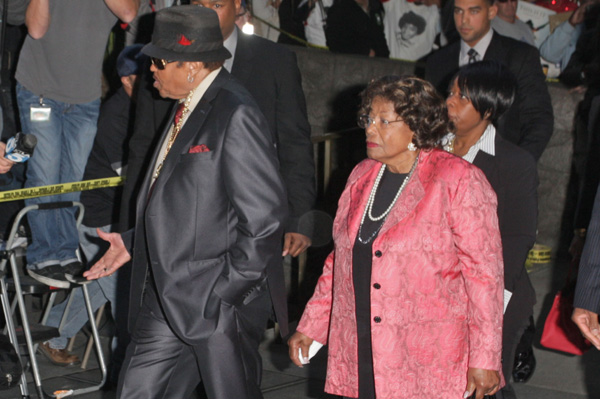 Sources say that Michael Jackson’s mom, Katherine Jackson (pictured above with Joe Jackson) remained silent as they read the guilty verdict. However, she cried quietly into a tissue as Randy Jackson rubbed her shoulders. La Toya Jackson let out a yell of happiness inside the courtroom and continued her celebration outside.

Katherine told reporters that she was “very happy with the verdict” and Michael’s brothers and sisters agreed.

“I’m just happy that it’s over with, not that it will bring him back but I’m happy he was found guilty,” Michael’s sister Rebbie Jackson said.

La Toya told reporters, “Michael loves everybody out here. He was in that courtroom and that’s why victory was served. La Toya also tweeted her reaction to the guilty verdict, writing, “Victory!!!”

“Michael I love you and I will continue to fight until ALL are brought to justice!” she wrote. “Thank you EVERYONE for your love and support! It will ALWAYS be appreciated”

No word yet from Janet Jackson, who is currently touring in Australia. The singer was forced to back out of two of her shows, citing the need for vocal rest per doctor’s orders, but is scheduled to perform tomorrow at the Sydney Opera House.