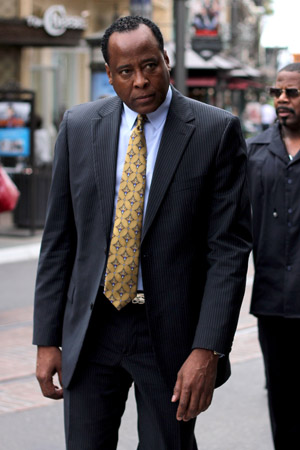 Michael Jackson’s personal physician, Conrad Murray, was convicted Monday afternoon of involuntary manslaughter for injecting the singer with a fatal dose of propofol.

The 12-member jury convicted Murray after 23 days of trial and 10 hours of deliberation. The physician remained stoic during the reading of the verdict, while Jackson’s sister, LaToya Jackson, expressed happiness over the outcome.

A crowd of nearly 300 people gathered outside the courtroom in Los Angeles and cheered as the verdict was revealed.

Murray was with Jackson when he died on June 25, 2009. The King of Pop’s bodyguard said that Murray instructed him to hide bags of propofol after EMTs were called to Jackson’s rented house. The singer’s former nurse, Cherilyn Lee, also testified that he asked her for propofol.

“He looked at me and said: ‘What I need is something that’s going to help me fall asleep right away, (and) the only thing that will help me do that is Diprivan,'” she told the jury, adding that she told Jackson that she was concerned about giving it to him. “‘No, I just need somebody to come here, and I will be safe. If it was monitored. As long as I’m being monitored.'”

Lee said she wasn’t asked back as Jackson’s nurse after that.

Murray never testified on his own behalf, though many of his medical peers blasted him for his lack of ethics, calling it “gross negligence.”

“Yes. It’s indicated for procedures and patient comfort, not for sleep. That’s an extreme deviation from the standard of care,” Dr. Alon Steinberg said.

Murray faces up to four years in prison and will lose his medical license if the conviction stands. He’s being held without bail until his sentencing on Nov. 29. Some justice experts predict he’ll receive six months to one year in prison, though he could get as little as house arrest.

Do you think Dr. Murray should go to prison?