What do Justin Bieber, Hayden Panettiere and a streaker have in common? They all took the stage during the 2011 MTV EMAs Sunday night.

Justin Bieber wasn’t about to let a little baby mama drama ruin his appearance at the 2011 MTV Europe Music Awards. The “Under the Mistletoe” singer showed up to support his new album — and girlfriend/EMA host Selena Gomez — during the awards show in Belfast, Northern Ireland. 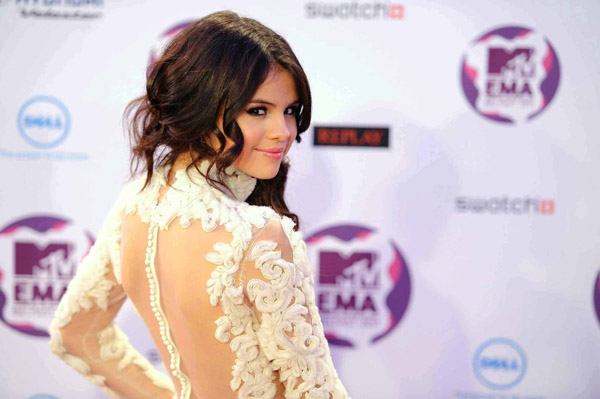 “There’s been a lot of crap on the internet lately, but I’ve pulled through it,” he said.

Gomez didn’t appear phased by the rumors and accusations — she sailed through her hosting duties with nine — yes, nine! — outfit changes and a performance of her new song “Hit the Lights.”

“Thank you MTV for having me host the EMA this year. Thank you to all that followed me throughout this weekend. Thank you to everyone who tuned into this year’s MTVEMA I had such an amazing time!!! I love you all,” she tweeted before going out to party with Bieber and LMFAO.

Lady Gaga also showed up to the EMAs and walked away with Best Song and Best Video for “Born This Way.”

“Thank you so much, I love you so much. I’m so grateful. I’m really smiling right now, but I know you can’t tell,” said Gaga. The singer wore a silver dress with an oversized tilted hat that covered her face, save for tiny holes for sight.

The best part of the night came when a streaker interrupted a flustered Hayden Panettiere.

“Hello, apparently the only way out is back that way,” the streaker, later identified as Irish actor David Monahan, said.

The Scream 4 actress asked him if he wanted to meet up for a pint afterward.

“I would love that. Um, I don’t have my phone on me though,” Monahan joked. “You know what? I’ll just leave you to it and I’ll see you at the after show.”

He then showed off his goods to the entire audience by lifting his hands and yelling “She was a cheerleader!” referring to her stint on the show Heroes.

What was your favorite part of the 2011 MTV EMAs?