Glee is tackling the sensitive sex subject of “the first time” this week. Will our favorite couples go all the way? Keep reading to see the preview.

Glee has played with the subject of sex before — it’s nothing new. What is new, is who’s doing the deed this week and going all the way. 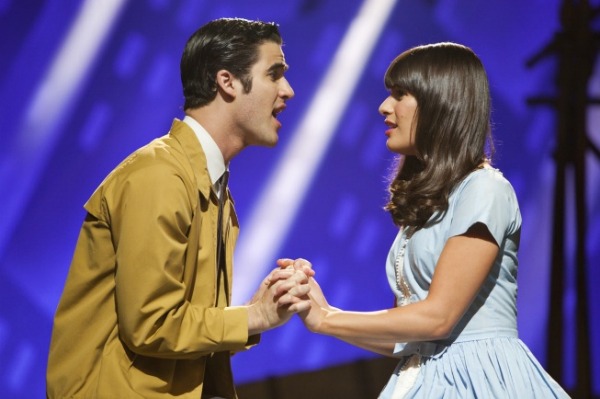 Newcomer Rory wanted to get into Brittany’s “pot o’ gold” last week, Puck’s been on the cougar hunt for as long as we can remember and Santana loves to remind everyone that Finn is terrible in bed.

See, sex has been explored on Glee, but never like it will be this week in “The First Time.”

In the all-new episode, “The First Time,” Blaine and Kurt take things to the next level with a same-sex love scene that will no doubt be talked about.

But that’s what Glee does — it creates buzz and game-changing moments.

In regards to filming the big moment, Chris Colfer (Kurt) recently told E!, “Because it was so simple, it really wasn’t that big of a deal. It’s so funny, because fans always want to make it out to be this huge thing that it really isn’t. When there are 40 middle-aged crewmembers in the room with you, there’s nothing romantic about it. It’s just like doing any other scene.”

Was he nervous about tackling such a sensitive subject? He added, “Not really. It’s sad but true, but I think I’m just so used to tackling delicate issues, so this was no different than other ones that we’ve done. It was definitely a big issue, something that I don’t believe has really been seen on TV too much before: two gay kids losing their virginities. Well, I’m not sure… did Blaine lose his virginity or was it just Kurt? I can’t remember. It was definitely Kurt’s. I don’t remember that being addressed. Oh, well. [Laughs.] But it’s always rewarding doing big storylines.”

“The First Time” is going to mesh McKinley High’s production of West Side Story with the kids’ big moment, so it’s bound to be emotional.

Blaine is also going to be inviting his pals from his old school to see the show — the musical, that is.

Check out a preview of “The First Time” and see what Darren Criss (Blaine) had to say about reconnecting with his old Warblers crew.

t
The other big couple “losing it” this week (well, not Finn) are Rachel (Lea Michele) and Finn (Cory Monteith) who have dabbled in the moment before, but never went through with it.

What do you think of Glee taking these characters “all the way” this week?