Are Madonna’s kids getting a royal education? Yes, if ex-husband Guy Ritchie has anything to do with it. 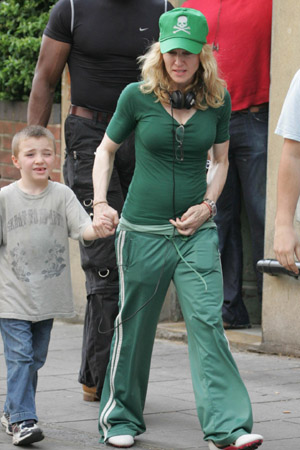 Madonna is considered by many as the Queen of Pop — and now her children are set to follow in royal footsteps by enrolling in the same private school previously attended by Kate Middleton and her sister, Pippa Middleton.

The $50,000-a-year Marlborough College has educated some of the most notable people in the U.K., including the Middletons and Princess Eugenie, according to the Daily Mail.

Madonna and her ex-husband, Guy Ritchie, want their kids to be part of that tradition.

“The plan to have Rocco educated in England started as Guy’s idea,” a source told the newspaper. “He wants Rocco and David to go to a boarding school as he did.”

“He feels strongly that the education system is better here than in America,” the source added.

First up is Rocco, 11 — Madonna and Ritchie reportedly put in the application for Marlborough College and are playing the waiting game. “Marlborough closed applications for 2013 yesterday, so everyone’s keeping their fingers crossed that Rocco gets a place,” the source said.

The couple’s adopted Malawian son, David, would follow when he’s old enough. “Guy wants David to be educated at a boarding school when he reaches 13, too.”

We’re curious about one thing, though: Where does Lourdes Leon go to school? We’re assuming she’s probably enrolled in New York, thanks to her decidedly American vocabulary.

Sadly, people do say that now.

Do you think Rocco will make it into Marlborough College?