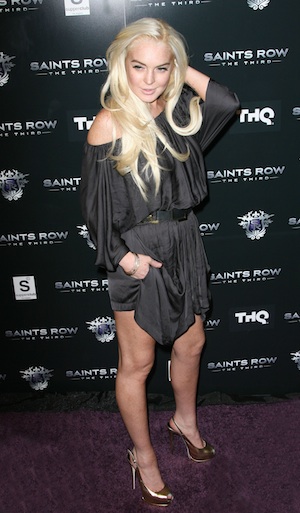 Lindsay Lohan checked into jail on Sunday night to serve her 30-day sentence for violating her probation. TMZ reported Lohan showed up for her mandatory jail time at the Century Regional Detention Facility in Lynwood, California. After a brief overnight stay, Lohan was released early Monday morning. Sheriff’s Deputy Mark Pope cited Lohan’s booking time at 8:48 p.m. and her release time as 3:10 a.m.

Lohan was served with an immediate 30-day sentence back on Nov. 2 after she was unable to keep up with her community service obligations and mental health treatment plan. Lindsay has been battling legal issues since 2007 when she was convicted of two separate DUIs and felony possession of cocaine.

At her sentencing hearing last week, Judge Sautner was extremely unhappy with Lohan’s lack of commitment to her probation terms. Sautner lectured Lohan as she handed out her initial sentence, followed by a strong warning to the troubled starlet.

“If you don’t accept the sentence or these new conditions of probation then I will just remand you to do all your time, do you understand? So I want you to listen carefully because you have an opportunity to say, ‘I don’t want to do this.’ Although the downtown women’s shelter is willing to take you back, I’m not going to put them through that again. I looked into another group called The Good Shepherd for Homeless Women. They refused to take you because they said you are a bad example for the women who are trying to get their lives in order. So, the morgue is willing to keep you. And I’m going to convert all your community service to morgue.”

Sautner went on to explicitly deny Lohan any early release, eligibility for house arrest, or electronic monitoring system in lieu of jail time. Since Lohan’s early release this morning is due to overcrowding and allowed by law, Lindsay’s six hour jail stint is technically legal. Lohan had until Nov. 9 to report to jail.

Not to be confused with an earlier jail appearance, Lindsay Lohan was also booked into jail on Oct. 20 but released on $100,000 bail. Lohan then showed up 40 minutes late to her prearranged community service appointment and was turned away. Lohan claim she was late because she got lost.

Judge to Lindsay Lohan: Go to therapy or go back to jail >>

Lohan currently has 270 days left on her sentence; if she violates her probation in the next two years she could spend her remaining probationary period in jail. Judge Sautner also required Lohan to attend monthly court appearances to show she is committed to following the terms set by her probation.

You can catch the full sentencing of Lindsay Lohan below courtesy of MSNBC: