Glee was ecstatic to announce the return of Chord Overstreet as Sam Evans and now the show is adding to the character’s on-screen family. Smallville’s John Schneider has been cast as Sam’s dad. 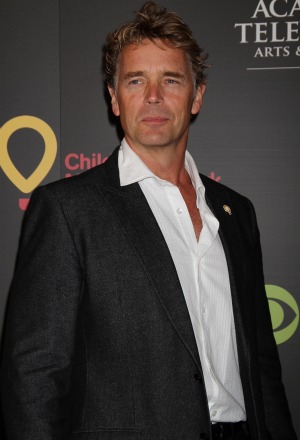 Sam Evans (Chord Overstreet) is headed back to McKinley High and he’s bringing his dad with him.

Gleek’s did a happy dance when they learned their favorite Trouty Mouth, Sam Evans, was going to be back on the Glee scene.

When it was officially announced Chord Overstreet was returning to Glee, creator Ryan Murphy said: “We love Chord and have always said that we wanted him back. So here’s an early Christmas present for all the Gleeks — Sam is coming back to McKinley, and just in time for sectionals!”

Now TVLine is reporting the character of Sam is getting a dad.

According to the report, former Smallville actor John Schneider is tapped to play the role of Sam’s dad, who last season lost his job causing a major rift in Sam’s high school world.

John Schneider will reportedly appear in the eighth episode of this season, which also marks Chord Overstreet’s return.

Whether or not John Schneider will stay on the show is not known at this point, as the dish is that he’s only on deck for one episode at this time.

Glee recently returned after a small hiatus with an episode dedicated to The Glee Project winner Damian McGinty.

This week, the show will be tackling the subject of the “first time” and the episode is being labeled a “game changer.”

We’ll be bringing you a preview on Tuesday, so don’t forget to come back and check it out.

What do you think of this season of Glee? Are the characters and stories what you expected?

Head over to our comments section and sound off — thumbs up or thumbs down for season three of Glee?