The CW is really rolling out the welcome mat for the guest stars on 90210 this week. Read on to see which country superstar and which Jersey Shore misfit makes an appearance.

What happens in Vegas stays in Vegas — or does it? You never know with the gang of 90210. 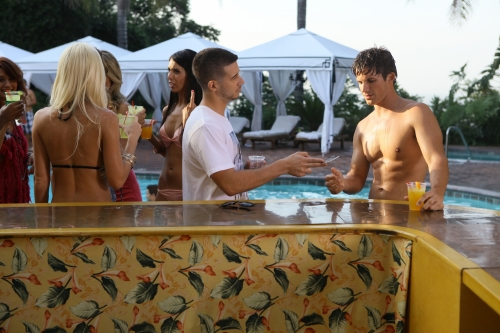 Remember when we told you Jersey Shore’s Vinny Guadagnino and country superstar Billy Ray Cyrus were going to be guest starring on 90210? Well, this is the week, people.

On this week’s all-new episode, “Vegas, Maybe?,” everyone heads to Las Vegas where Austin’s dad (Billy Ray Cyrus) is introduced.

While chilling poolside, the guys meet a celeb (Vinny Guadagnino), which leads Liam to a game of celebrity poker.

Check out a preview of “Vegas, Maybe?” and see if you can spot Jersey Shore’s Vinny Guadagnino.

CW teams up with Netflix >>

If you want more dish on what’s going down on your favorite CW shows, click here for a few November sweeps details.

You can also see what the network has planned for 2012 by clicking here. Trust us, there’s returns, the final season of One Tree Hill and other important dates you’ll want to know about.

Have you been following 90210 this season? Head over to our comments section and tell us what has been your favorite episode so far.