Charlie’s involved in Gemma’s disappearance and Bridget was faced with an ultrasound machine. That’s what we learned last week on Ringer. This week it’s devastating news and more lies.

We’ll give Ringer this — it certainly lives up to its name, and not just because it features twins who are “ringers” for each other. 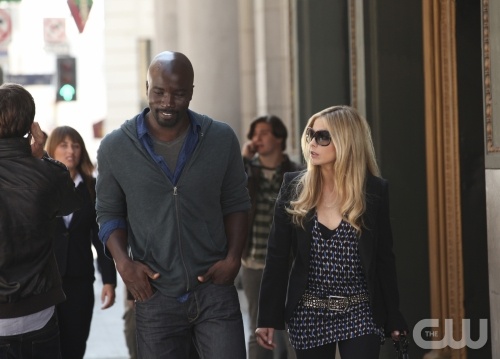 Somewhere down deep, maybe we did know Charlie the NA sponsor was not what he seemed, but his involvement in Gemma’s disappearance was definitely not on our radar.

With the news that Gemma’s father has been cast, this story is ready to take a turn — but whether it’s a good or bad turn remains to be seen.

Ringer’s new episode, “Maybe We Can Get a Dog Instead?,” looks like it will be picking up where last week ended — with news that will no doubt revolve around the “baby” Bridget has been pretending to carry.

Elsewhere, Juliet continues to take a shine to her off-limits teacher, and Malcolm, surprisingly alive, arrives in New York. Will he blow Bridget’s cover?

Check out a preview of “Maybe We Can Get a Dog Instead?” and head over to the CW Tuesday night (Nov. 8) for the full episode…

Ringer was recently picked up for a full season order along with Hart of Dixie and The Secret Circle. Check out the network’s 2012 lineup by clicking here.

If you’re curious as to what to expect from November sweeps, the CW was kind enough to reveal a few secrets like The Vampire Diaries’ midseason finale dish and more.

What has been your favorite episode of Ringer so far? Head over to our comments section and sound off!