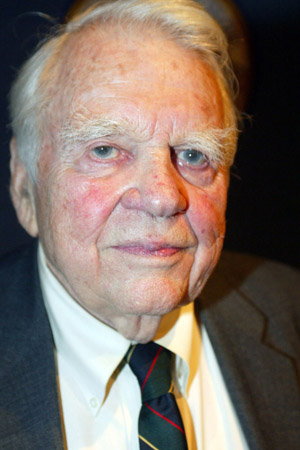 Legendary broadcaster and “America’s favorite grouch-in-chief,” Andy Rooney, passed away early Saturday less than two weeks after he underwent surgery. He suffered serious complications and remained in the hospital until his death.

“It’s a sad day at 60 Minutes and for everybody here at CBS News,” said Jeff Fager, the chairman of CBS News and the executive producer of 60 Minutes in a statement. “It’s hard to imagine not having Andy around. He loved his life and he lived it on his own terms. We will miss him very much.”

Rooney signed off 60 Minutes for good last month, expressing his thanks for a long — and sometimes controversial — career.

“I wish I could do this forever. But I can’t,” he said during his final broadcast. “A writer’s job is to tell the truth. I know I’ve been terribly wrong sometimes, but I think I’ve been right more than I’ve been wrong.”

Rooney — known for his angry rants about topics ranging from politics to everyday hassles — joined CBS in 1949 as a writer and remained with the network for the majority of his career. He was suspended from the network without pay in 1990 for claiming that homosexual sex leads to early death.

“I’ve done a lot of complaining here, but of all the things I’ve complained about, I can’t complain about my life,” said Rooney. “All this time I’ve been paid to say what is on my mind on television. You don’t get any luckier in life than that.”

Love him or hate him, it’s safe to say network television won’t be the same without him.