Only months after giving birth to her fourth child, daughter Harper Seven, Victoria Beckham is rumored to be working on a new children’s line. 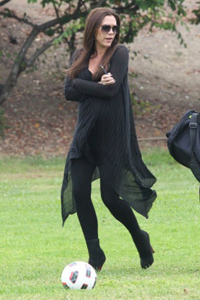 Former Spice Girl Victoria Beckham is reportedly looking to add fashion designer to her already impressive repertoire. Recent reports are buzzing that the fashion maven is set to design a children’s clothing collection based off the clothes her own children enjoy wearing.

A source close to Beckham tells Showbiz Spy: “In some of her downtime with Harper, Victoria has been jotting down drawings and coming up with ideas for kids’ clothes that are practical but fun, too.”

Beckham’s already eponymous fashion empire includes sunglasses, denim, ready-to-wear clothing, fragrances, and a diffusion line of dresses called Victoria by Victoria Beckham. Her brand has grown rather rapidly over the past three years and is set to net over $96 million this year alone. Her latest mini-collection was recently revealed and described as “classic, timeless” dresses for Net-a-Porter. Prices for the stylish line range from about $1,600 to $6,500 for her more intricate dresses.

Should Beckham launch the new children’s line, she will be following in the footsteps of fellow children’s clothing designer Gwen Stefani, whose Harajuku Mini collection is due to hit Target stores later this month. It would also be no surprise if she used her newborn daughter as inspiration for the line, having recently taken her on her first fashion outing at a Prada store during New York Fashion Week.

According to the Daily Mail, however, a spokesperson for the mother of four has said there are no plans to add baby wear or children’s wear to any of Beckham’s current lines.