Jessica Simpson is broadcasting the state of her intestines on Twitter: Gassy with a chance of toot. 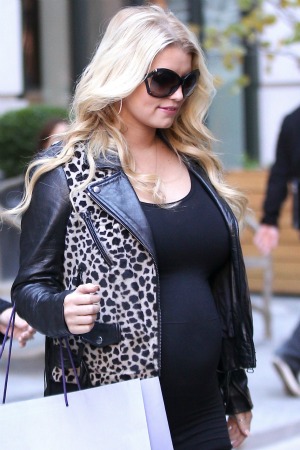 It’s one of those well-known celebrity truths: Jessica Simpson loves to fart. She farted her way through her reality show Newlyweds, telling her now ex-hubby Nick Lachey, “You love my stinky ass,” and in 2010 was accused of farting her way through a business meeting. Now the mom-to-be says her pregnancy is giving her even more opportunities to partake in her favorite bodily function.

Simpson, who officially announced her pregnancy on Halloween, tweeted about her huge increase in gas since her baby took up residence in her belly.

As uncouth as it may sound, Simpson is right. Many pregnant women do experience a sudden and marked increase in gas due to an increase in progesterone, which relaxes the gastrointestinal tract and slows down digestion so the body of the mother-to-be can absorb more nutrients from food.

Later in pregnancy, the fetus pushes on the mother’s intestines, causing further gas and bloating.

Simpson looks to be around six months pregnant with her first child. She and fiance Eric Johnson got engaged last fall. While the couple has yet to set a wedding date, friends say the singer wants to wait until after the baby is born to tie the knot.

Jessica Simpson’s ex is having a baby too!