Kelly Rowland may be in hot water with her best friend, Beyonce. The singer has spilled the pink beans about Beyonce’s baby! 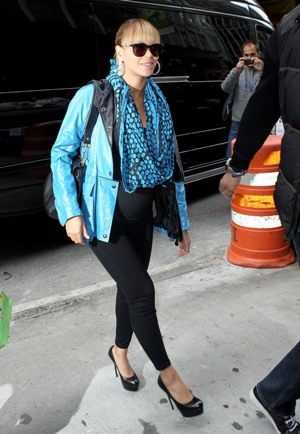 Beyonce’s baby is a girl! The happy news comes from Kelly Rowland, though we’re not quite sure the megastar wanted her friend to reveal she’s expecting a pink bundle of joy.

“I’m so happy for my sister and her husband,” Kelly Rowland said of Beyonce during an interview with U.K. news agency Bang Showbiz. “They’re so happy in this moment right now, as they should be. They made a little bundle of love. I’m so excited for them.”

If she’d stopped right there the secret would have remained safe, but lucky for the inquiring public Kelly Rowland continued on. “I have no idea what I’m going to buy Beyonce at the baby shower because Jay is going to buy that little girl every single thing possible. She won’t be spoiled, but she will be very well looked-after.”

Hoorah! A baby girl for Beyonce and Jay-Z!

If Kelly isn’t ousted from the life of her former Destiny’s Child band mate for revealing the baby’s gender, she’s willing to pitch in — even with the stinky parts. “I’ll be on hand for babysitting duties,” said Kelly Rowland. “And I’m actually very good with messy diapers.”

While no official confirmation has been issued from Beyonce stating that she is expecting a girl, odds are Kelly is privy to the correct information. In addition, multiple anonymous sources have told gossip magazines the baby is a girl, plus some very pink Louboutins were ordered for Beyonce’s baby months ago!

Despite rumors that Beyonce’s baby bump is a fake, the singer looks gorgeous and more visibly pregnant each day. It is believed Beyonce’s due date falls sometime in Feb. 2012.

Do you have any baby name suggestions for Beyonce’s baby girl?