Jennifer Aniston and Justin Theroux met while filming the comedy Wanderlust together. Check out the new trailer and see if you can spot the chemistry.

We have been rooting for our favorite girl-next-door to meet the perfect guy, and it seems she finally did while filming her new movie, Wanderlust. Jennifer Aniston, 42, and Justin Theroux, 40, felt sparks fly while filming this hilarious romantic comedy together. 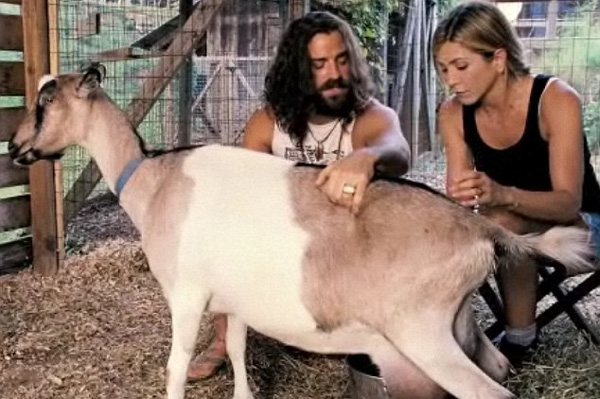 Don’t believe us? Check out the trailer below in which Aniston’s character, a New Yorker named Linda, and her husband (played by Paul Rudd) leave city life to join a hippie commune. Theroux’s character, Seth, introduces them to this more relaxed way of life by telling the uptight couple, “We prefer ‘intentional community,’ we’re not a bunch of hippies sitting around playing guitar.”

Cut to Theroux, sporting long shaggy hair and a full beard, playing guitar for a circle of nudists and environmentalists. There’s also some on-screen chemistry as he teaches her how to milk a goat — and enjoys shocking her with several sexual innuendos. Perhaps this is where the sparks started flying between Aniston and Theroux?

Since the movie wrapped, the pair have been practically inseparable since their relationship went public last summer. Despite pregnancy and marriage rumors (as well as sightings of the couple wearing matching rings on their wedding fingers) Aniston told Hello! Magazine that she is not engaged.

“I am not planning to get married any time soon,” she said. “I’ve been married once and I don’t know if I’ll get married again. I can tell you that as of this very moment, as of today, I have no plan to get married.”

As for the pregnancy rumors? “No, we’re not pregnant. It’s just I quit smoking, so I’ve gained a couple of pounds,” she told the magazine.