Lindsay Lohan is preparing for jail time by hanging out at Hollywood’s Roosevelt Hotel. First she struck a pose for Playboy and then she partied with Leonardo DiCaprio and the J. Edgar cast. TGIF!

What do you do when you’re given an extra few days of freedom before your prison stay so you can go get naked for Playboy again? If you’re Lindsay Lohan, you hit the J. Edgar AFI Premiere party with Leonardo DiCaprio, Clint Eastwood, Naomi Watts and Armie Hammer. 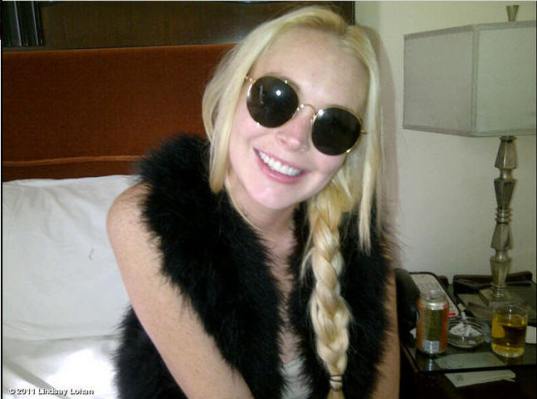 With her million dollar nude spread set to go into the Jan 2012 issue of Playboy, Lohan hit the Roosevelt Thursday afternoon to take it all off again for a re-shoot. (It seems the first photos weren’t to Hugh Hefner’s liking.)

After striking a new set of poses, Lohan returned to the Hollywood hot spot that night to party with the J. Edgar crew, wearing a black cardigan, beige skirt and fierce black heels to the affair. SheKnows has to admit, the simple eye makeup, which was basically lashes and a strong outline, paired with red lipstick and red nail polish had her looking like a stunning pinup girl.

Last night’s J. Edgar celebration was more than just a movie premiere. Eastwood and DiCaprio’s biopic was given the honor of opening this year’s AFI Film Fest and Ron Howard, Dermot Mulroney, Hilary Swank, Jennifer Love Hewitt, Brian Grazer, Brett Ratner, Ed Westwick (Gossip Girl), Kristoffer Polaha (Ringer), Lea Thompson (Separated at Birth) and Ryan McPartlin (Chuck) were a few of the Hollywood players on-hand for the screening, though some of them may have skipped the after party.

Lohan is scheduled to check into lockup on Wednesday, Nov. 9 for a “30-day sentence” and then continue her community service at the Los Angeles county morgue. While it was made clear she can’t get away with serving her sentence under house arrest again, she will likely only have to serve only six days due to overcrowding.

Last night’s party could just be a case of Lilo supporting her pal Leo, but with the weekend upon us, it could also be the beginning of her final, pre-jail blow out. Stay tuned.

By the way, if you’re wondering why Lohan’s smile is so wide in the twitter pic above, it’s because she got them all cleaned up with a Zoom whitening treatment. “Thanks Dr. Dorfman for the zoom,” she tweeted Oct. 29, 2011. “My gums are so sore though!”