The lead guitarist for the heavy metal band GWAR was found dead on the band’s tour bus during a trek to Canada.

Fans of the costumed hard rock band GWAR are mourning the loss of guitarist Flattus Maximus (real name Cory Smoot). The 34-year-old rocker was found dead on the band’s tour bus early Thursday, according to an official statement from the band. 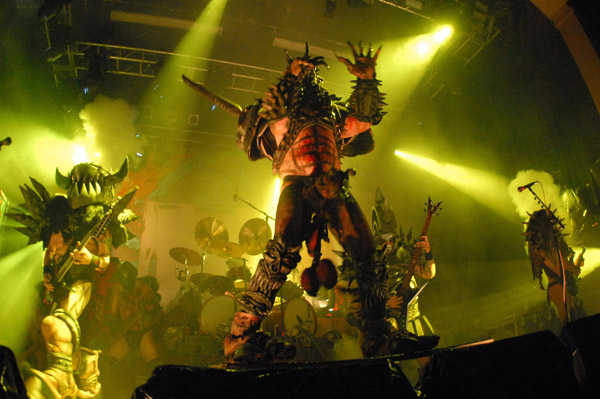 “It is with a sense of profound loss and tragedy that the members of GWAR must announce the passing of their longtime guitarist and beloved friend Cory Smoot, also known to thousands of metal fans worldwide as Flattus Maximus,” band leader Oderus Urungus (real name Dave Brockie) said in a statement. “Cory was found deceased this morning as the band prepared for a border crossing. There is no word as to the cause of death and the members of GWAR are completely shocked and devastated that this has occurred.”

The band was on their way to a tour stop in Edmonton, Alberta, according to the city’s newspaper. The group had just played a gig in Minneapolis shortly before Smoot was found.

No cause of death has been released, though a venue manager who has worked with the band for over 20 years told a Minnesota newspaper that they weren’t known as hardcore drinkers or drug users.

“Teach Me How to Dougie” rapper T Bone murdered >>

Smoot joined the 30-year-old band back in 2002, joining a long line of musicians playing the Flattus Maximus character. He counted his influences as KISS’ Ace Frehley and another guitarist who died before his time.

“Dimebag Darrell [from Pantera] — rest in peace — he’s definitely a huge, huge influence of mine. Anything within the metal rock genre’s that were ever innovative, that stood out and wasn’t caught in the conveyor belt of what was popular at the time,” he said during a 2006 interview with Ultimate-Guitar.com.

Now his GWAR band mates are left to remember their friend and partner.

“At this point, we are just dealing with the loss of our dear friend and brother, one of the most talented guitar players in metal today,” Brockie said.