The new trailer for the 21 Jump Street big screen reboot has dropped. It’s based on the ‘80s TV procedural starring Johnny Depp, but Jonah Hill and Channing Tatum are a whole new breed of cop.

Jonah Hill and Channing Tatum go back to high school in the new 21 Jump Street trailer. While the set up comes from the original Johnny Depp television series, the tone comes straight from the raunch-tastic, explosive and very R-rated mind of Jonah Hill. 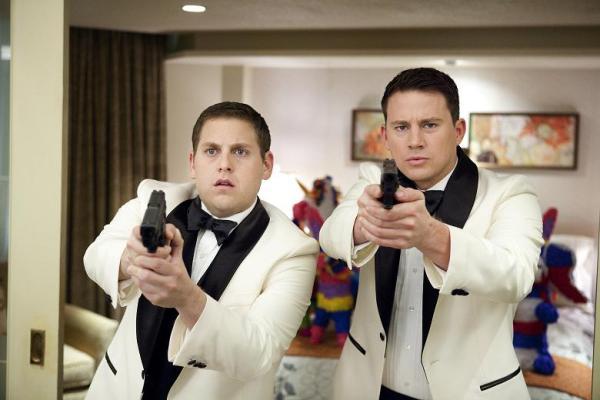 In the trailer below, foul-mouthed clowns Jenko (Tatum) and Schmidt (Hill) team up in police academy and prepare to become “badass” cops… which turns out to mean bike-riding cops, who wear shorts and screw up drug busts.

Luckily, in addition to being total idiots (with great buddy chemistry), they look young enough to go back to high school, so Jenko and Schmidt are transferred to 21 Jump Street, where a “cancelled undercover program from the ’80s” has been resurrected.

Naturally, that means they’re going to throw a party, do drugs and so much more. If you’re familiar with Hill’s work, you can see where this is going. You might even recognize a few Superbad references in the trailer, which features Ice Cube, Dave Franco, Ellie Kemper and Nick Offerman.

Johnny Depp makes a tiny cameo in the 21 Jump Street reboot, but not the trailer.

The 21 Jump Street trailer is not for office or family viewing. It includes drugs, violence, sexual references and bad language. Enjoy!

Fletch finally gets a reboot