Lindsay Lohan remains free for a little while longer to complete her Playboy obligations. 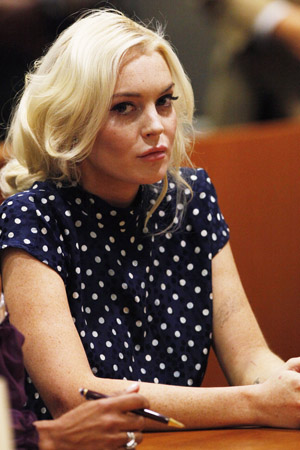 It looks like Lindsay Lohan will put off her 30-day (or potentially 30-minute) prison stay for her chance at redemption in Playboy. The judge in her probation case is reportedly giving her some time to complete reshoots of her upcoming nude magazine pictorial.

“Lindsay was told that the Playboy executives wanted to go another direction with her shoot so they asked her to come back for a second time,” a source told Radar Online. The first pictures weren’t what they wanted, so they’ll redo the whole thing on Thursday.

The new million dollar shots – scheduled to hit newsstands in January 2012 – will put off Lohan’s jail stint for at least another 24 hours. What happens if Hef isn’t pleased with those photos? It’s unlikely they’ll keep putting her jail time off for days for the “tasteful” shoot, however Lohan probably won’t mind any extra moments of freedom she gets.

“It was an opportunity for her and she’s done thousands and thousands of covers, so this was just something… she’s 25 now. It was just something that was her decision… we have a contractual say in how far it goes and her and Mr. Hefner will decide,” her mother, Dina Lohan, told Access Hollywood.

“She’ll pick five covers, he’ll pick the one, but she has a say. I don’t want to get into the contract, but it will be tastefully done,” she continued.

Maybe the new theme will be prison chic?

Do you think Lindsay Lohan should be kept out of jail for Playboy?