Is Jessica Biel back with Justin Timberlake? She opens up to Elle magazine about love, kids — and the movie role that got away. 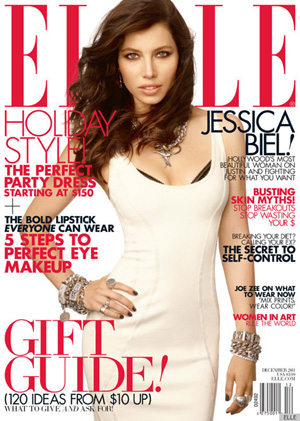 Jessica Biel got heads turning when she was spotted with her ex-boyfriend Justin Timberlake at an after-party for his new movie, In Time. In fact, the couple were spotted “sneaking kisses, whispering to each other and sharing quick back rubs and caresses,” throughout the night. The couple split up in May of this year, but does this mean they have rekindled the flame?

“A girl doesn’t kiss and tell,” Biel, 29, coyly says in the December issue of Elle.

She did, however, reveal that she does want to start a family… one of these days. “I think probably at some point it would be something I’m interested in. But I don’t feel pressured,” she says. “I was never one of those girls who dreamt of my wedding and my Prince Charming.”

She says that her laid-back attitude about kids is not something that her mom always appreciates. “To piss off my mom, I used to say, ‘I’m never having kids, and I’m going to be a fabulously rich old maid living in a house with cute butlers and dogs,'” she joked.

Biel does say that there is one role that she wanted “so badly” that she didn’t land — The Notebook, which eventually went to Rachel McAdams.

“I was in the middle of shooting Texas Chainsaw Massacre, and I auditioned with Ryan Gosling in my trailer — covered in blood,” she says. “But there’s a million that get away. We’re gluttons for punishment. It’s just rejection.”

McAdams and Gosling did end up dating after the movie, and Biel says that she also has a habit of dating actors. “I think [actors] are the people you meet and so it just kind of happens,” Biel says. “Let me tell you: It never happens on purpose.”