Wedded bliss will have to wait because Jessica Simpson doesn’t want to be a pregnant bride. Pregnancy bliss, however, is in full effect. 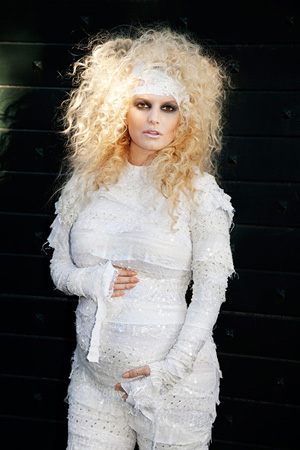 While chart topper and fashion maven Jessica Simpson has had a ring on it for almost a year now, the buxom blonde wants to postpone her wedding to former NFL star Eric Johnson for a little bit more, as she plans on giving birth to her first baby before walking down the aisle.

“They’re both still really committed to getting married, and were both really into making decisions about what kind of wedding they wanted,” continues the source. Apparently, the nuptials were originally scheduled for next month,” the source adds, “It’s just going to be at a later date now [because] they really want to enjoy this time in their lives.”

After months of speculation, Simpson finally confirmed her pregnancy via her Twitter account on Monday, posting a picture of herself wrapped as a mummy while clutching her belly with the caption, “It’s true! I’m going to be a mummy!” But the announcement failed to make the same headlines as singer Beyonce’s pregnancy did back in August at the MTV Video Music Awards. This may be due to the fact that it was done a few short hours after Kim Kardashian’s surprise divorce from her husband, Kris Humphries.

It was also rumored that Simpson, along with her father Joe, failed to broker a $500,000 deal to announce her pregnancy via a tabloid magazine. Their plan fell through when the British version of OK! magazine put Simpson on the cover with the caption, “Yes I’m having a baby.”

We hate to say it, but Simpson has been having quite the Jan Brady week, with both Kardashian’s divorce and rumors of Justin Bieber allegedly fathering a newborn child overshadowing her announcement. Let’s just hope Beyonce doesn’t end up giving birth to her baby on the same day Simpson does.