Though most people will go see this movie for the fight sequences, the romance between Freida Pinto and Henry Cavill’s characters in Immortals is enough to make the female audience melt. We sat down with Freida and her other admirer from the film, Stephen Dorff, to get the scoop on this surprising love story.

t
With her alluring dark features, it’s no wonder Freida Pinto was chosen to play the mysterious virgin oracle in the mythological epic, Immortals. It’s also unsurprising that her gorgeous co-stars, Henry Cavill and Stephen Dorff, would enjoy vying for her affection.

“I like the scenes where I’m flirting with Freida,” Stephen told SheKnows. “Some of them got cut out because it became a little bit monotonous, saying the same thing to her, “I want you. I need you. Go out with me. Forget the English kid.”

Unfortunately for Dorff, Freida’s character Phaedra does end up with “the English kid,” the film’s sexy hero, Theseus. We were happy to learn that Cavill’s personality is just as appealing as his rock-hard abs.

“He was an absolute gentleman,” said Pinto. “He really helped me get as comfortable as possible. Considering Henry was already on set shooting, he knew a lot of the cast, it was kind of sweet to keep me calm.” 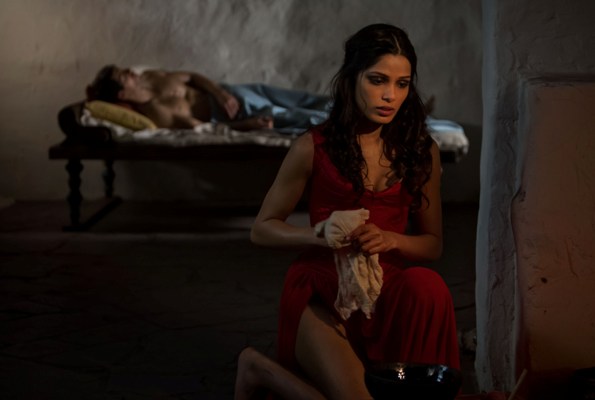 “[The director] gave me the love scene to be the first thing that I shot in the film,” Freida told us. “I was like, “Really? I hardly even know Henry.” I guess that was a bit nerve-racking.”

Luckily for Freida, she told us she had some assistance.

We were happy to hear that she didn’t give up the goods just yet! Immortals is just one of four films Freida stars in this year, and with her recently earned title of ELLE magazine’s Most Promising Young Actress, we have a feeling this is just the tip of the iceberg for the starlet.”I had a body double,” said Pinto. “It was someone else who was going to be really nervous instead of me.”

So what does she plan to do next?

“I’d like to change the game up a bit,” Freida told SheKnows. “I’ve done the whole damsel in distress role. I’d like to do something different.”

We’re thinking something evil… those smoldering eyes are perfect for a villainous temptress!