The Jersey Shore is a lie!?! With the Jersey Shore season 5 premiere date announced, (un)shocking allegations arise and this time, there’s video proof.

The controversy over how real reality TV actually is feels age old at this point, especially in the wake of the Kardashian/Humphries wedding meltdown. Now, however, The Jersey Shore Exposed! Proof It’s Fake! video breaks down a Snooki and Deena bar fight to prove there’s no way it was real. Plus, don’t miss the sneak peek of Jersey Shore season 5! 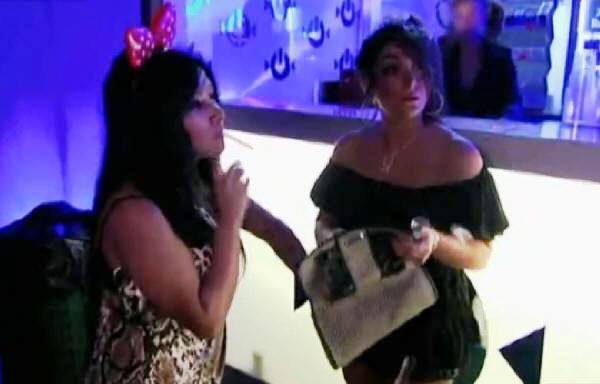 Host and comedian Sean Klitzner is a (not so) serious Jersey Shore fan, so he was loath to share the flub he found in Jersey Shore season 4, episode 11, “Situation Problems,” which aired Oct. 13.

In the clip that’s been broken down (below), Snooki and Deena are already angry after a bunch of Italian guys at the Central Park bar got too close to them on the dance floor. Anger turns to fury when a bartender throws ice cubes at them, and Snooki and Deena proceed to “trash” the place, breaking the bottles lined up on the bar.

Clearly, Florence, Italy was wise to set up parameters for the Jersey Shore visit!

Klitzner cries foul over this Italian scene, however, claiming the bar brawl is completely fake. The video breaks it down visually, but here are the main components of the argument:

1 – A producer threw the ice, not the bartender: The key to this argument is that the ice comes from the wrong direction, with the camera catching a glimpse of a woman wearing an ear piece. In the slow motion replay, you can even see that woman, presumably a producer, retracting her arm after the ice throw.

2 – The bar was set up for the Snooki attack: Although it’s a hopping club, there’s no one actually standing at the bar where the showdown happens. In addition, Snooki isn’t knocking down expensive bottles of booze. The bar is lined with cheap cocktail mixers.

“It’s all real and we couldn’t make this all up?” an MTV spokeperson responded when presented with the video, but you be the judge.

Jersey Shore is a lie? The Video Proof

Watch the video breakdown of the Snooki and Deena’s ice fight encounter and see what you think. You can skip the first segment and get right to the Jersey Shore action, which starts just at 23 seconds.

EDITOR’s NOTE: This video has been permanently removed from the site for legal purposes. We apologize for any inconvenience.

Real or not, Jersey Shore returns to Seaside Heights, NJ for season five, which premieres on Thursday, Jan. 5, 2012 and yes, there’s already a sneak peek. Check it out: