Kim Kardashian’s engagement ring is not worth $2 million, confirms her mother Kris Jenner. 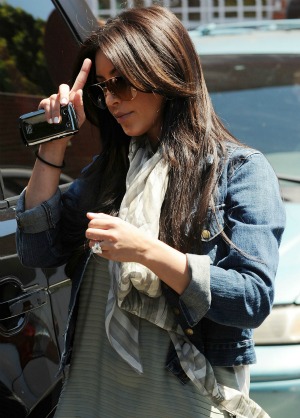 What’s the latest shocking secret spilled in the Kim Kardashian divorce drama? The true worth of her engagement ring, which her mother of all people says is far less than what has been reported.

Kim Kardashian’s engagement ring was reported to be worth $2 million — a report that the reality star never once tried to dispute. Now Kris Kardashian says the media made it all up and the ring is worth far, far less.

Kim Kardashian’s divorce: Who gets what? >>

“Well first of all, I mean come on, that wasn’t a $2 million ring,” Jenner explained to Ann Curry on the Today show. “I’m here to say that as well… It was not $2 million. It was less than half of that. I don’t really know the exact price, I didn’t buy the ring, but some of these reports are so outrageous and everybody gets so carried away.

“Sometimes when people write things down, or put things on the front page of a newspaper or a tabloid, that’s the truth to them. And I’m here to say it’s not.”

Of course, her sister Khloe Kardashian said Kim’s ring cost $7.99 — and Kim was spotted wearing a strikingly similar ring on her other hand while she was dating Reggie Bush.

Will Kim Kardashian return her engagement ring? That has yet to be decided — or, at least Kris Jenner doesn’t know if it has been decided.

“It’s none of my business, to be honest with you,” she said. “I’m sure they’ll work that out when they get back.”

Kim Kardashian announced her split from Kris Humphries after just 72 days of marriage. The couple’s lavish fairy tale wedding was broadcast in a two-part special on E!.