Games and Grandma are the focus of this week’s episode of The Secret Circle.

Truth or Dare? What would you choose? When in doubt, always say dare — the truth can be awfully messy! 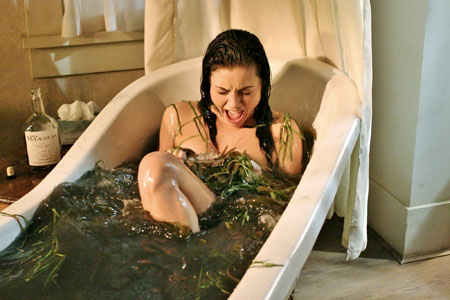 The Secret Circle is building a mystery that we have a feeling is going to leave us hanging until after the show’s holiday hiatus.

On this week’s all-new episode of The Secret Circle, “Beneath,” Cassie (Britt Robertson) becomes worried after her Grandma seems to have gone off the map. While searching for her with the gang, a game of Truth or Dare ensues, leaving Faye (Phoebe Tonkin) rattled and Adam (Thomas Dekker) a bit jealous.

There’s bound to be some lip-locking on this episode, but will Adam and Cassie ever turn a corner? Who knows, from the preview it seems she’s setting her lips on Jake.

Check out a preview of “Beneath” and head to the CW Thursday night (Nov. 3) for the full episode…

The CW officially describes “Beneath” as the following: “After not hearing from her Grandmother for a couple of days, Cassie becomes concerned and wants to go look for her. Diana decides the entire Circle should go in case Jane is in trouble. She also invites Jake along, much to Adam’s dismay. A storm turns the day trip into an overnight excursion, so Faye suggests a little game of Truth or Dare to liven up the evening. However, things take a horrible turn when Faye is forced to reckon with someone from her past.”

The Secret Circle, along with Ringer and Hart of Dixie, has been given a full season order by the CW. The network president, Mark Pedowitz, said of the shows, “With compelling storylines, engaging characters and tremendous buzz we firmly believe Hart of Dixie, Ringer and The Secret Circle can become signature series for The CW, the kind of top-notch shows that are synonymous with our brand.”

Head over to our comments section and sound off about the CW’s hit show The Secret Circle. We want to know what your favorite episode has been so far!