A judge sentenced Lindsay Lohan to jail today for violating her probation in what seems like a never-ending court battle. 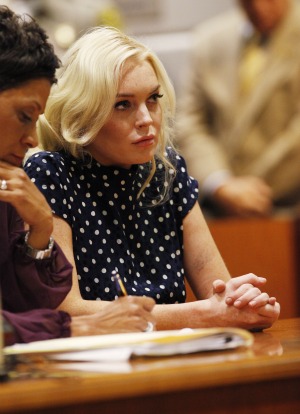 At least one judge has had enough of Lindsay Lohan‘s shenanigans. The troubled star has been ordered to serve 30 days in jail for violating the terms of her parole by being kicked out of her community service assignment at a Los Angeles women’s shelter.

Superior Court Judge Stephanie Sautner imposed the 30-day sentence on Lohan, along with a complicated list of instructions on how she is to serve out the remainder of her parole.

All of Lohan’s remaining community service hours must be completed at the county morgue, and Judge Sautner laid out a specific timeline of how many hours of both service and court-ordered counseling the actress must have completed when: 12 morgue days and 2 counseling sessions each month, with everything completed absolutely no later than March 29, 2012.

If Lohan does not comply, she will immediately be sent to jail for 270 days.

The judge also replaced Lohan’s parole officer and ordered that any violations be reported to the court immediately.

Here’s the thing with that jail time, though: While Judge Sautner also specified that Lohan must go to the actual jail and not serve her time under house arrest again, the sheriff’s department has already said that, due to overcrowding, she will likely only have to serve a fraction of her sentence, just six days.

Lohan, who dressed far more conservatively for court today than she has in the past, is said to be extremely relieved by the sentence, which is pretty light considering the judge could have sent her to jail for 270 days today.

Lindsay Lohan to pose nude for Playboy for almost $1 million