Shaquille O’Neal is doing his best to ruin his rep as a good role model for kids with his shocking new memoir. 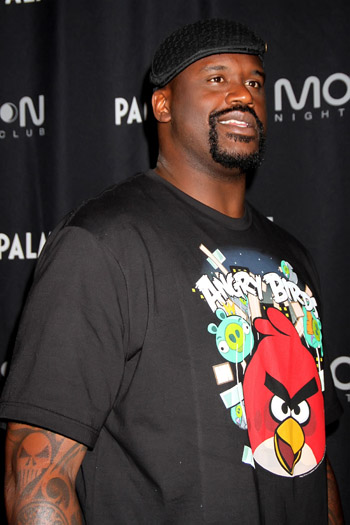 Talk about a shocking revelation! Retired pro-baller Shaquille O’Neal admits in his new book that he once threatened to kill enemy — and former teammate — Kobe Bryant.

In Shaq Uncut: My Story, the giant player recalled his tumultuous relationship with Bryant during the 2003-2004 season — around the same time Bryant was dealing with rape allegations and O’Neal was fighting for a new deal.

“Just before the start of the ’03-’04 season, the coaching staff called us in and said, ‘No more public sparring or you’ll get fined.’… Phil was tired of it. Karl Malone and Gary Payton were sick of it,” he wrote in the book. “So what happens? Immediately after that Kobe runs right out to Jim Gray and does this interview where he lets me have it. He said I was fat and out of shape. He said I was milking my toe injury for more time off, and the injury wasn’t even that serious.”

To say he was upset was an understatement — he promised a full-on Shaq Attack against his foe. “I let the guys know, ‘I’m going to kill him,'” he said.

The beef started — according to Bryant — because O’Neal didn’t stand by his side during the Colorado rape case. “Kobe stands up and goes face-to-face with me and says, ‘You always said you’re my big brother, you’d do anything for me, and then this Colorado thing happens and you never even called me,'” O’Neal wrote in the book.

However, Shaq was upset that Bryant never invited his teammates to his wedding — that’s when the real problems began.

“Everything was starting to calm down when I told Kobe, ‘If you ever say anything like what you said (in the interview) ever again, I will kill you.'”

He also said that Bryant had a huge ego and thought too highly of his own abilities.

O’Neal doesn’t have a lot of love for Miami Heat star LeBron James, either.

“There’s no question in Game 5 LeBron was kind of out of it… I always believed he could turn it on at any moment, but for some reason he didn’t. Not against the Celtics in 2010 and not against the Mavericks in 2011. It was weird. It’s one thing to be a passer, but you are supposed to be the One. I’m watching him play against Dallas, and they’re swinging the ball and they get him a perfect open look — and he’s kicking it to Mario Chalmers. Makes no sense.”

Yikes. Someone woke up on the wrong side of the bed before he wrote his memoir.

Do you still have respect for Shaq after reading his thoughts on Kobe Bryant and LeBron James?