Donald Trump has accused Jon Stewart of being a racist because of political jokes made at the expense of Herman Cain. 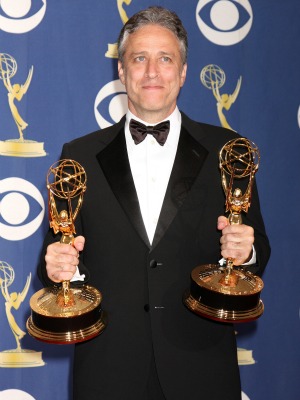 Donald Trump is on the warpath again, and this time it is not Martha Stewart or Rosie O’Donnell who is feeling his wrath — surprisingly, it is Jon Stewart.

The host of The Daily Show has won Emmys for his scathing political satire and criticism, but apparently Trump is not a fan — going so far as to accuse Jon Stewart of racism. What?

Stewart, well-known as an equal opportunity critic, did a piece on last night’s show mocking presidential candidate Herman Cain’s weak denial of sexual harassment charges. While not a single word that came out of Stewart’s mouth could be viewed as racist, Trump is taking issue with the host’s “tone.”

The Celebrity Apprentice host ripped Stewart, saying, “It’s not what he said, but the way he said. The tone of his voice, the inflection. Unbelievable.”

“Other people get taken off the air, and when he [Stewart] says it, people smile and sort of say, ‘Wow, I can’t believe he gets away with that,'” Trump said. “When somebody else says something, even a little bit non-politically correct, they go after ’em. But when Jon Stewart does a horrible, horrible thing to the African-American community, they leave him alone.”

Stewart is sure to call out Trump for his comments tonight on The Daily Show.

Tell us: Is Donald Trump a blow hard or a civil rights crusader?