Britney Spears mortifies Joe Jonas during a lap dance at her concert. 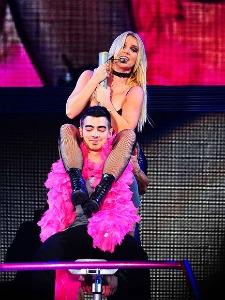 While most of the male population wouldn’t mind getting up close and personal with Britney Spears, Joe Jonas looked absolutely mortified when the chart topper provocatively wrapped her legs around him in front of thousands of concertgoers at London’s Wembley Arena on Tuesday night.

The singer was performing on the final London leg of her Femme Fatale tour when she plucked the Jonas Brother on to her stage for a frisky performance. Jonas, who has a squeaky-clean Disney pop star image, may have gotten more than he bargained for by attending Spears’ concert.

Dressed in fishnets and a neon pink leotard, Spears wrapped her legs around the bashful-looking Jonas brother while singing her hit song “Lace and Leather” as thousands of fans screamed their approval in the auditorium.

The chart topper usually targets a male member of the audience to tease during this song, having previously toyed with rumored fiancé Jason Trawick at her New York concert over the summer.

Jonas seemed to enjoy it all in good fun, having later posted on his Twitter account, “What a great night! LONDON! you rule! what a way to end the @britneyspears tour.”

“And… @britneyspears thanks for the strip tease…. ;)”

While many critics have panned the tour by saying that Spears was out of shape physically, Spears still managed to wow her fans with her inventive stage productions, including performing from a swing as a male aerial artist swung beneath her and her several colorful costume changes throughout her show. While we may never quite get the old Spears back, at least she’s here to stay.