Justin Bieber isn’t ready to become a father just yet. 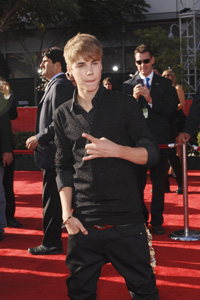 A 20-year-old fan has reportedly filed a paternity suit against chart-topper Justin Bieber, alleging that the underage star impregnated her backstage during one of his L.A. concerts and is the father to her now 3-month-baby.

According to TMZ, a representative for Bieber tells the website, “While we haven’t yet seen the lawsuit, it’s sad that someone would fabricate malicious, defamatory, and demonstrably false claims.”

“We will vigorously pursue all available legal remedies to defend and protect Justin against these allegations,” the rep adds.

The California woman, Mariah Yeater, wants the 17-year-old hitmaker to take a paternity test to “scientifically confirm” that he’s the father according to paperwork obtained by Star magazine. She claims that she got frisky with the pint-sized pop icon after one of his concerts last year.

Yeater is also asking the court to force Bieber “to provide adequate support for my baby” as well.

Bieber, who is currently dating Disney starlet Selena Gomez, recently revealed that he wants to settle down and have children before his mid-twenties. He also told Rolling Stone magazine during a February 2011 interview, “I don’t think you should have sex with anyone unless you love them.” Well, he’s mentioned over and over again that he really loves his fans, hasn’t he? We also can’t help but wonder what Gomez has to say about the recent allegations.

While Bieber and Gomez are brand-new parents to a 10-week-old puppy that the couple adopted together in Canada just last week, we’re sure he wasn’t expecting his fatherhood role to get this serious.