American Idol heartthrob and season seven winner, David Cook, is in the midst of his co-headlining tour with Gavin DeGraw. Touring for his new album, This Loud Morning, David offers SheKnows some inside info about life on the road, music and his idea of a perfect girl. 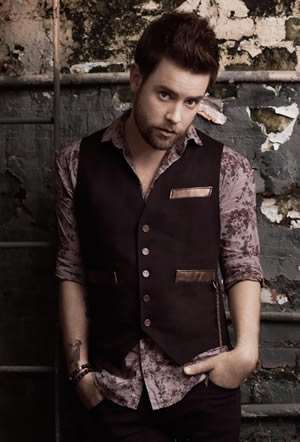 SK: What’s a love song you’ve written for a girl?

DC: I write a lot of songs about girls. The entire record before Idol was all about one girl, but it’s not a very nice record. She must have really done a number. Also, “Fade Into Me” isn’t about one girl in particular but it’s the idea of that perfect girl, finding your soul mate, someone you can disappear into.

SK: What qualities do you find attractive in a girl?

DC: A lack of pretense is important, and people that don’t get hung up on themselves. I really like a girl with confidence and a sense of humor, someone who appreciates and enjoys life.

SK: What’s the craziest thing a female fan has ever done for you?

DC: During the Idol tour my mom was at the show, and someone threw up a pair of panties and a bottle of KY. I live on a bus with all guys, what am I gonna do with that? And my mom was in the crowd which made it even worse.

SK: Do you prefer a girl in blue jeans and a t-shirt, or all dressed up?

SK: How has it been touring with Gavin Degraw?

DC: We’ve known each other for a few years now; we met at a radio gig in Orlando. Unfortunately, we don’t ride the same bus, but we all hang out on stops. Carolina Liar is on tour now with us, so it’s a real fun communal tour.

SK: If you could choose anyone, what artist would you want to collaborate with?

DC: Definitely Springsteen, but I doubt he would collaborate with me.

SK: What’s your favorite song on the new album?

DC: It fluctuates, but right now it’s “Fade Into Me.” It’s a new single and a fan favorite. I also really like “Circadian” right now which is the first track on the record.

SK: What besides music are you passionate about?

David is running his first marathon in March in LA for the cause.