Will Kardashian return her $2 million engagement ring to Kris Humphries? What about the money they earned from the wedding? 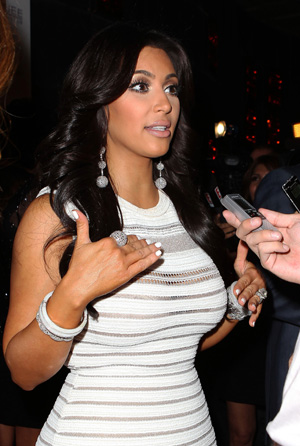 Let’s look at the Kim Kardashian and Kris Humphries 72 day marriage by the numbers. The wedding cost a reported $10 million (which they didn’t pay for) and they earned $18 million from wedding sponsors and she sported a $2 million engagement ring. They won’t have to give back any of the money that they earned from the wedding — but will Kim share any with Kris or give him back her $2 million ring?

In recent divorce filings, Kardashian indicated that unspecified jewelry that she received during their short relationship is to remain hers. TMZ reports that under California law, if Kris bought the ring for her and gave it to her, then it is hers to keep. However, there are rumors that Kim actually bought the ring herself at a huge discount.

If the groom did buy the ring, most women return it. Crystal Harris returned her engagement ring to Playboy’s Hugh Hefner, for example.

Their short 72-day marriage earned them around $250,000 per day, taking into consideration the money they made from their wedding, plus $1 million from People magazine for exclusive shots of their ceremony and reception. On the heels of this, many people are wondering if the marriage was a hoax from the beginning.

“Kim was looking for a husband and Kris was selected for her, amongst others,” a source told Radar Online. “She wasn’t really into him, but she hoped she would be able to develop some feelings. But it never happened.”

Also check out: Kim Kardashian’s divorce — Who gets what? >>