Jessica Simpson’s baby news may be out of the mummy bag, but there’s more to hear from the singer and fashion designer about her newfound contentment in life and love. 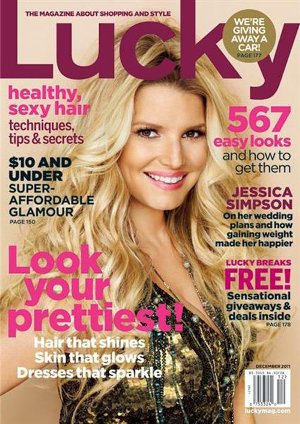 Before Jessica Simpson became a mummy to formally announce her much-speculated pregnancy, she sat down for an interview with Lucky magazine.

Speaking of fiance and dad-to-be Eric Johnson, Jessica Simpson gushed to the magazine, “when I met him I just felt so comfortable with myself and where I was in my life that if he didn’t want to be part of it, he didn’t have to be.”

The interviewer noted a calm “Zen” quality about the 31-year-old who said, “I’m not looking for more fame or money,” Jessica Simpson shared. “I feel very secure in those areas.”

Of her weight fluctuation, the subject of many tabloid articles over the past two years, Jessica Simpson explains there was a positive side, “All kinds of women started coming up to me and saying what an example I was setting by not constantly dieting. Everybody fluctuates, but I’m open about my weight and I’m still confident,” she added. “I didn’t cry about it too much.”

Not only did she become a role model for a new group of women, but Jessica Simpson’s fashion line benefited from her fuller figure. “I got so much scrutiny for putting on extra pounds, but I think that the decision not to make myself anorexic was actually great for branding,” said the mom-to-be. “Because when you’re really, really skinny, not everybody can relate to you.”

Somewhere in Jessica Simpson’s future sits a trip to the bridal salon. “I haven’t started shopping for our wedding yet,” she admitted. “When I got engaged, everyone thought I would get married immediately, but I have not put a single dress on, and by the time this comes out I will not be married! We’re just enjoying being engaged right now — and that’s honest.”

Engaged — and as we now know — pregnant!

Be sure to pick up the December issue of Lucky magazine for more with Jessica Simpson.